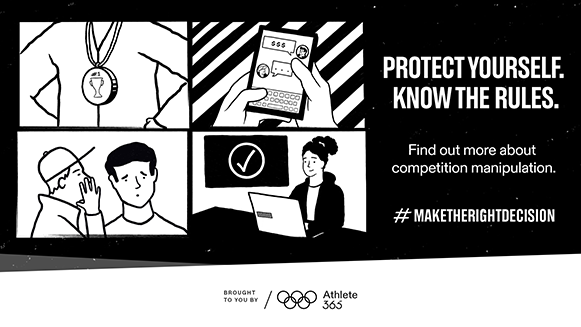 Say ‘no’ to match manipulation

The IOC’s Believe in Sport campaign seeks to raise awareness around the integrity of sporting competition. This means eradicating manipulation of competitions, using insider knowledge to inform betting and individuals betting on their own sport.

In other words, it is a campaign to stamp out match manipulation and cheating that is associated with gambling activities.

Integrity within hockey is something that both Rogier Hofman and Jackie Mwangi feel very strongly about. Hoffman and Mwangi are both members of the FIH Athletes Committee and both have long and distinguished careers within the game.

Hofman was a key member of the Netherlands men’s squad for more than a decade and over the course of his 212 matches in the orange kit, Hofman has been an Olympic silver medallist, a World Cup silver medalist and has numerous other titles and medals to his name.

Mwangi is a Kenyan international, a member of the FIH Development Committee, chairperson of the African Hockey Federation Athletes Committee and is now the women’s national team coach.

In the following excerpt, we hear the thoughts of Hofman and Mwangi as they discuss the IOC campaign to stop match manipulation and also reflect on their personal experiences of the positive aspects of hockey. For the full interview, go to Watch.Hockey.

Why is integrity within the game so important?
Jackie Mwangi: “Fair competition is so important because it is the very essence of why we play sport. Manipulation creates an unfair advantage to one side and that is not right at all.

Hockey is a relatively clean sport when it comes to gambling and match manipulation, how can the hockey community make sure it continues to be a sport that is known for its integrity?
Rogier Hofman: “Education is the most important part. We need to teach the kids that it is about fair game, giving everything you have. Off the pitch it is about friendship and doing the sport you love. It is not just about sport but it is relative off the pitch in life.”

Jackie Mwangi: “For me. I am the most competitive player on the pitch. If I could not compete 100 per cent, no, that is never the way sport should be. That is what I love about hockey, everyone gives 100 per cent.”

How important are campaigns such as the IOC Believe in Sport campaigns when it comes to raising awareness.
Rogier Hofman: “As FIH we have to be role models in this campaign. What is s important is that in some cases you might not even realise that what you are doing is manipulation. For example, you might want to lose a match as that would give you a better chance in the semi-final – that is a form of manipulation.”

Jackie Mwangi: “I agree with Rogier, but also there have been several instances where a major game is coming up and a main player goes on line and says ‘I am injured’ and that could be construed as ‘insider information’. We have to educate players to realise when they might be potentially manipulating the game.”

Manipulation and cheating are the darker sides of the sport. What are the positives in sport for you, both personally and across society?
Rogier Hofman: “Sport has always been part of my life. I don’t know anything else. The best friends I have are all part of me being an athlete. Even now, as a member of the FIH Athletes Committee, it gets you closer to the people around you. I hope my children will find the joy in sport that I have.”

Jackie Mwangi: “We have been having hockey development camps for many years and that basically empowers the people from the slums and helps them develop their skills. It changes the community and gives people something positive. It gives people confidence. There is also life skills training going on through hockey training. Hockey scholarships gives the children a chance to win scholarships. This is happening across many countries in Africa.”

Rogier Hofman: “Sport made me who I am. I am proud of what I have done and who I am. Where I live, we all have the opportunity to choose to play sport and listening to Jackie, I realise the privilege in that.”

Jackie Mwangi: “In my part of the world, not finding a place to play is not an excuse. You can start playing hockey anywhere. You may not have the infrastructure but that doesn’t mean you can’t start something. You just need the determination to start what you love doing and in this case, it is hockey.”

The IOC Believe in Sport Campaign highlights the importance of integrity in sporting competition. Under its code of conduct there are four key rules that all athletes, coaches and officials need to be aware of:

Never bet on your own sport or the Olympic Games;
Never manipulate a competition and always do your best;
Never share inside information bout your sport; and
Always report any approach to manipulate or anything suspicious.