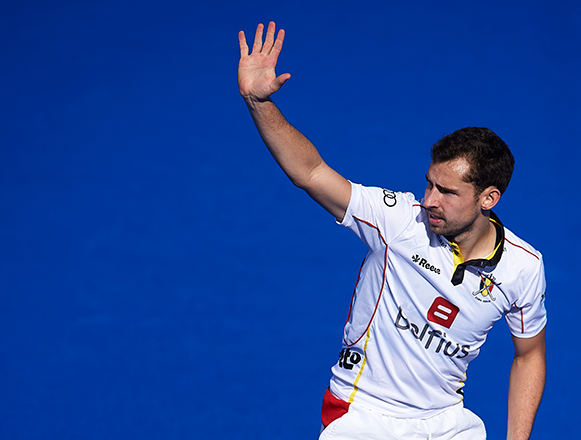 Belgium’s Red Lions may not have been able to successfully defend their European title at last week’s European Championships in the Netherlands, but they are very much targeting glory at the Olympic Games Tokyo 2020, as we reveal in our latest Olympic Spotlight feature.

Following their stunning triumph at the Odisha Hockey Men’s World Cup Bhubaneswar 2018, few would dispute that the Red Lions are the hockey success story of the past ten to 15 years. In the years leading up to that glorious occasion in India, it had been a case of ‘so near, so far’ for this hugely gifted side. By winning the 2018 World Cup, 2019 European Championships and recently being crowned 2020-21 FIH Hockey Pro League champions, the team coached by New Zealander Shane McLeod are rightly considered as one of the front-runners for gold in Tokyo.

Ahead of Belgium’s quest to land their first ever hockey Olympic gold medal, we caught up with versatile attacker Florent Van Aubel – who is nicknamed the magician by his fellow Red Lions due to his incredible technical skills – to discuss the challenge ahead. The interview was conducted in April 2021.

Florent Van Aubel, thank you so much for joining us. The Olympic Games Tokyo 2020 is just around the corner. How are you guys feeling about the prospect of competing in Tokyo? You must be very excited.
Florent Van Aubel: “That is exactly what I was going to say. It is very exciting times. We have been waiting a long time for these Olympic Games, and finally they are around the corner, and we are training very hard at the moment.”

What are your ambitions for Tokyo? You won silver at Rio 2016, so it has to be eyes on the big prize, right?
Florent Van Aubel: “I have to be honest, we’ve been talking internally quite a lot about it. It is clear that when you win Olympic silver, you win the World Cup and win the European Cup the year after (in 2019), it is pretty logical that we are going to try to achieve the gold medal.”

Looking at your qualification for Tokyo, as you mentioned, you won the 2019 European Championships. That was a hugely significant moment for Belgian hockey, being the first time you have won that competition. But winning that ticket to Tokyo, that must have been quite important for you guys as well.
Florent Van Aubel: “That was the most important thing. We had two big targets. Playing a European Cup at home in Antwerp, where you know there is going to be a big crowd behind you, you want to achieve the gold medal, to win the European title for the first time in Belgian history. But we also knew that by winning the European Cup, we automatically would qualify for Tokyo, which would mean having a head start over other countries who had to play their qualification games. That meant we had three or four months head start, but that was before the coronavirus hit and before it [Tokyo 2020] was postponed by one year. But it was certainly a big target, to win the European Championships to qualify for Tokyo.”

When you get to Tokyo, you have a tough pool, make no mistake. You have Great Britain, Germany, Netherlands, Canada and South Africa. It is going to be a challenge – there are no easy matches.
Florent Van Aubel: “No, and that is what happens when you compete at the Olympic Games. Every match is a very important match, and it is how you deal with the pool games. That sets you up for the quarter-final stage. That is something that we have been working a lot on. That format has been around for quite some time, and you need to have your peak performance in the quarter-final and it is based on one game, and that is what is so interesting about that format. You can be very good in the pool stage and finish first, but it is still played on one game. That is where we have tried to train to make sure that we are physically and mentally as fit as possible for that quarter-final.”

With a format such as this, is it a case of taking it one game at a time to see where the journey takes you?
Florent Van Aubel: “It is a bit of both. It is very cliché to say that you have to take it one game at a time, and it is true, but you also have to think ahead, think about what you want to show in the pool stage. What kind of tactics do you show? What kind of PC [penalty corner] variations do you show? That is something we always like to think about, what we would like to show to the opponent. We know that at the moment, Belgium is a team that has been closely analysed, so we know that we can maybe keep some things ‘behind us’. That is also an interesting part, and we talk a lot about it.”

Thank you very much for talking to us, Florent. We wish you all the best for Tokyo 2020!
Florent Van Aubel: “Thank you!”

Visit the Watch.Hockey App to view the full interview.