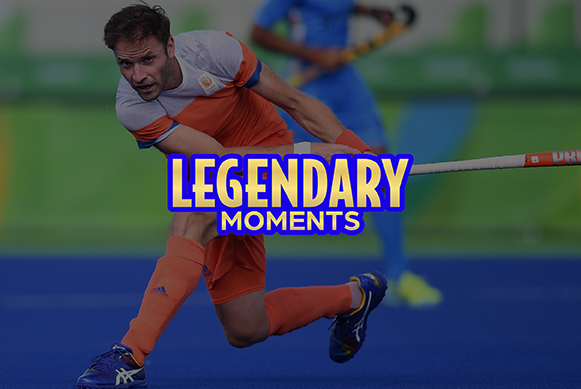 In the latest of our Legendary Moments series, we re-live the greatest moment in the history of Belgian Hockey, the day when the Red Lions lifted the Men’s Hockey World Cup for the first time.

Played in front of a sell-out crowd at Bhubaneswar’s Kalinga Stadium, the final saw Belgium taking on the Netherlands – who one year earlier had beaten them in the 2017 European Championship final – was tense and utterly enthralling, with neither team being able to get the upper hand before the most dramatic of shoot-outs.

Former Netherlands star Rogier Hofman – the current chair of the FIH Athletes Committee and FIH Executive Board Member, who retired from international hockey following the Olympic Games Rio 2016 – talks to FIH about the final, what it’s like to play hockey in India, and also his memories of attending the hugely successful Odisha Hockey Men’s World Cup Bhubaneswar 2018 in person.

A full match replay of the historic contest is available for all fans on the Watch.Hockey app.

Rogier Hofman, thanks so much for talking to us! The Odisha Hockey Men’s World Cup Bhubaneswar 2018 was an amazing event from start to finish. I’m sure you were following all of the action very closely!
Rogier Hofman: “Yes, I was! It was an amazing tournament. I’d just joined the FIH Athletes Committee, so I was there in India. I got there for the last games of the pool stage and stayed through to the semi-finals. When the final came, I was already back home in Holland.”

It was good that you got to sample that atmosphere at the Kalinga Stadium, which was electrifying.
Rogier Hofman: “Playing in India is always a bit special, because of the atmosphere, the people around the stadium, and everything else. It is always great to play there because as an athlete that is the thing you want: to play in front of a lot of people and play the big matches of a World Cup. It is always nice to be there.”

As we know, the two finalists were your beloved Netherlands, who were chasing a fourth World Cup title and a first since 1998 when Teun de Nooijer scored that famous golden goal in Utrecht, and Belgium - a team that had made incredible strides forward in recent years but were still waiting for their first major title, having finished as runners up at the Rio 2016 Olympic Games and were defeated by the Dutch in the final of the European Championships a year earlier. Neither team topped their pools, but both showed terrific form ahead of the final, didn’t they?
Rogier Hofman: “I think both teams did a great job. It was quite a strange tournament because the programme [schedule] was a bit different to normal. The important thing about such tournaments – especially when you get to quarter-finals, semi-finals and the final – is you have so many important games. You have to make sure that in those matches you are at the top of your game. I think both teams did that, which was great for them. I think that they were both wonderful teams to watch because they were playing amazing hockey. Of course, it has been a while since we [the Netherlands] won a World Cup, or an Olympic Games for that matter, so there was a lot at stake and it was a great final.”

The feeling, certainly amongst the media, was that the outcome of this final – a low countries derby match – would be tough to predict, as the teams were so closely matched. It certainly proved that way, didn’t it? What are your thoughts about that contest?
Rogier Hofman: “I think I had the same feeling, that it was really close [between them] and had been up until the final of the World Cup. Belgium is doing really well, and right now, I think they are the best in the world. But, back then, it was really close. Both teams could win, so Holland played a great game in their semi-final [beating Australia], and Belgium did as well (defeating England). I think it was a 50-50 chance. I also think it cost both teams a lot of energy to reach the final, which is something we saw in the final itself. Both teams were quite exhausted and did everything they could to make sure that they stayed in the game. Sometimes staying in the game means that it is not going to be a 5-4 score, which of course would be great in a final. The tension [in that game] was amazing.”

As you say, it was such a tense game. Played in front of a full stadium with an incredible atmosphere, but it was so, so tense. As someone who actually played in the last World Cup final, in The Hague in 2014, how did you feel, watching this one?
Rogier Hofman: “I think once you have played those games, and so soon afterwards - of course 2018 wasn’t that long after I stopped playing hockey – yes, you still feel what it means to play in those games. Watching those games gives an extra dimension, and just talking out it now gives me goosebumps, thinking about the 2014 final in The Hague. Of course, that wasn’t the best outcome for us [being defeated by Australia], but still playing those games, that is why you want to be in the national team. I really hope that for those guys, they can play more finals because that is why you play.”

In the end it went to a shoot-out, where of course anything can happen. And it did! Only five of 12 efforts being converted, and there was even a video referral that went in favour of the Netherlands after Belgium had thought they had won the World Cup. It was so dramatic, right until the very end, wasn’t it?
Rogier Hofman: “Yes, it was. If you compare the 0-0 game to the excitement of the shoot-out, it was amazing. [It was difficult] for both teams – to have the feeling that you have already won but that changing; and feeling like you have already lost but then you have a chance again to win. In both ways, it is a strange thing and really difficult to change your mindset so quickly. In the end, Belgium did it just that little bit better.”

When Belgium had that shoot-out effort disallowed by the video referral, that could have derailed them. Mentally, they did very well to stay strong enough to power through.
Rogier Hofman: “I think at that level, when you are playing in the finals of tournaments like this, it really is about the small details, because every team is almost equal. It is in the details, in the really small things. I agree. In that moment with so much stress and pressure, if you are able to switch mentally, then that is a really powerful thing. That gave them just that little bit extra to win that game, and they did a great job.”

The Netherlands and Belgium are now building towards the Olympic Games Tokyo 2020. Both will have their eyes on that gold medal. They are both very much in the running for the big prize, but anything can happen in Olympic competition.
Rogier Hofman: “I completely agree that anything can happen. You just have to look at Rio 2016, seeing that Argentina won the gold medal. Nobody could have predicted that, apart from the Argentinean guys, of course! I think it is the same for these Games. Anything can happen. It is such a strange time and such a different world for everybody [due to COVID-19], but if you look at how Belgium has been playing the last few years, I think you can say that they are the team to beat. I think a lot of teams have great players and of course have a chance to win, but for me, Belgium is the team to beat. You can look at the players from Australia or Holland and know that they can perform so well that they of course have a chance. But in my opinion, they have a chance if they beat Belgium.”