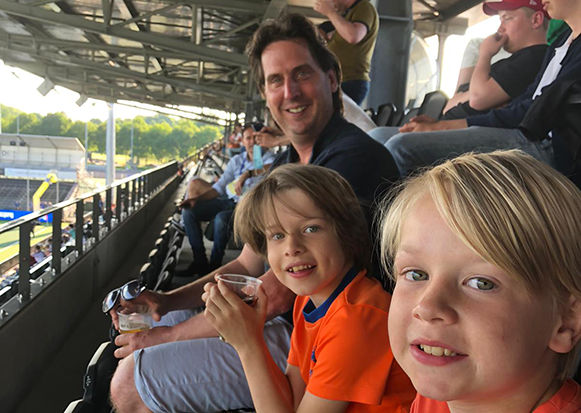 When Argentina’s Delfina Merino, speaking on the FIH Hockey Pod podcast, said that ‘people need the Olympics, because sport has the power to make people feel happy’, she was echoing the thoughts of millions of sports fans around the world.

Whatever the sport, the sight of athletes competing and the thrill of watching your team or athlete strive to win, is something that produces vicarious feelings of excitement and happiness among sports lovers and occasional spectators alike.

This was in evidence at the EuroHockey Championships 2021 as the Wagener Stadium in Amstelveen was once more ringing out to the sound of fans cheering their teams on. While the stadium capacity under normal circumstances is 10,500, to meet Covid-19 restrictions the daily audience is limited to 3,500. Those lucky fans in attendance were required to sit in family groups and maintain social distance from other groups.

Despite that, those in the stadium, mainly orange-clad Dutch fans or those wearing the yellow, red and black of Belgium, were certainly making plenty of noise to make up for the reduced numbers.

While a great atmosphere is part and parcel of sports viewing, there is an added benefit for the athletes participating at the EuroHockey Championships.

Kerry, who is renowned for his attention to detail will have welcomed the presence of spectators as many of his team will not have played in front of the size of crowd or in the pressured environment they will face in Japan for the Olympic Games Tokyo 2020.

Likewise for the officials. The men and women blowing the whistle or running the technical bench at Amstelveen would have been glad of an opportunity to put all their skills to the test at a competitive tournament. In other parts of the world, the officials heading to Tokyo have also been ensuring they are as ready for international competition as it is possible to be.

“The Trans-Tasman series was a great chance for the five of us from Oceania who are heading to Tokyo to get some competitive international action under our belt,” said New Zealand’s Kelly Hudson.

“It’s been quite a nice run in really. First we had the North Island v South Island competition, which was highly competitive as the athletes were chasing selection. Then we had the Trans-Tasman and there, the bragging rights between the two countries meant that all the matches were played at a really high level of competitiveness.”

Back in Europe, as the EuroHockey Championships headed towards the final stages, European Hockey Federation President Marijke Fleuren was delighted with the atmosphere in the stadium. She spoke to FIH after spending the evening with her family watching the semi-finals of the men’s competition.

“This feels like a new beginning. It [the break in action] has given us a chance for us to reflect and do things even better, possibly in a more ‘down to earth’ way. We are all just enjoying being here and watching hockey – which has been so good, it is like hockey from another planet.

“All the fans I have spoken to say the same. It is so lovely to see their heroes out on the pitch. It means the world to them.

“But, actually, it is all about happiness. It really is as simple as that.”