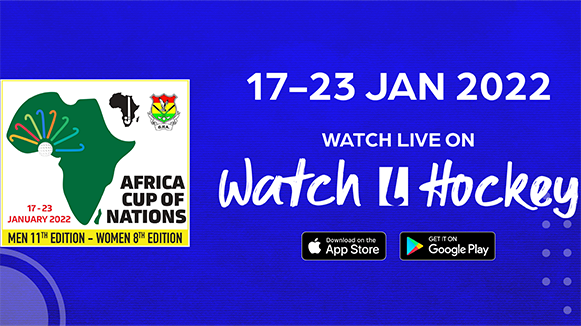 It’s a welcome return to international hockey competition for seven men’s teams and eight women’s teams at the Men’s and Women’s Africa Cup of Nations 17-23 January, taking place in Accra, Ghana in the Theodosia Okoh Stadium.

It is also a vitally important tournament for development and continued growth of hockey across the African continent, says former South African international and triple Olympian, Marsha Cox.

Talking about the forthcoming competition, where the winner will book their place at the next blue riband event – the men's and women's World Cups – Cox said that it was imperative for hockey in the region to get even more competitive so that nations pushed each other to perform better and better.

'The fact that there are teams challenging South Africa’s dominance is very important. For any team to climb up the points system, we need all our teams across the continent to perform and climb the rankings.'

This is an event with a rich history: the first edition of the men’s competition took place in 1974 where this year’s host nation, Ghana, were crowned champions, with Kenya taking the second spot.

Since then, aside from two victories to Egypt in 1983 and 1989 – during which time South Africa were excluded because of their stance on apartheid – the competition has been dominated by South Africa men’s team. The last of their seven victories coming in 2017 when they beat the host nation Egypt in a very close 2-1 encounter.

The women’s competition began 16 years later when Zimbawbe won the inaugural event, beating Namibia into second place. Since then, the tournament has been dominated by South Africa, as they have taken the gold medal for the subsequent six editions. In the last event in 2017, South Africa beat Ghana 4-0 in the final.

The host nation’s teams have been training hard ahead of this event. Both the men’s and women’s teams have been in hockey camps for the past month. While most of the players for both teams are based in Ghana and play for teams in the Ghana domestic league, this year the men’s team will be joined by three athletes who play club hockey in other countries: France-based Derrick Owusu Lee, Michael Kofi Baiden who plays in South Africa and Gideon Awuah, who is based in Italy.

Grace Ankomah, team manager for the Ghana women’s national team said the ambition was to take advantage of being the host nation and to win the tournament and a place at the FIH Women’s World Cup taking place later this year in the Netherlands and Spain.

Making their debut at the event are the Uganda women’s team. Head coach Moses Nsereko says: ‘Obviously, it is going to be a hard challenge for us, remember we are making our debut in an international championship but I have trust in these ladies. We have been training, and I see positives in them and I am expecting a good performance.

‘Being debutants of course they will be a little bit shaken, not used to an international audience, but we have mentally prepared them and we expect a good performance from them,’ Nsereko added.

Marsha Cox, who remains South Africa’s most capped sports player, says that, while she expects a double South African victory, there could well be some upsets.

‘Egypt will be a tough opponent. They are very, very motivated. They have had a taste of major tournaments and they will have their eyes on the prize. In the past few years Kenya and Namibia have also shown potential and have put a lot of hard work in. Kenya had players in the Youth Olympics so that makes them a strong competitor.

‘Also, on the women’s side Kenya have put in a lot of work. They will pose a challenge. Zimbabwe have a hugely talented group of young players. We will have to see how they overcome their lack of international experience.’

As Cox says, South Africa men’s and women’s teams will be overwhelming favourites to take both titles. The men’s team in particular enjoyed success at the Olympic Games Tokyo 2020, where they turned heads with their performances against Belgium and Germany. On the back of their ninth-place finish in Tokyo, the team broke into the top 10 in the FIH World Rankings.

The women’s team didn’t enjoy such great success in Tokyo, but they have the experience to finish on top of the podium.

The competition starts at 7am on 17 January with an intriguing encounter between the ambitious Namibian women’s team and the debutant nation Uganda. The men’s competition starts later in the day when host nation Ghana meet Uganda. Both teams will be hoping to get off to winning ways.

The full interview with Marsha Cox can be seen here.