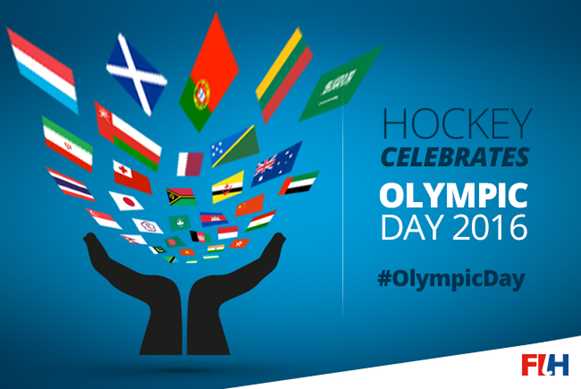 On 23 June the world celebrates Olympic Day - a celebration which is much more than just a sports event. It is a day for the world to get active, learn about Olympic values and discover new sports.

Several weeks ago, the International Hockey Federation (FIH) reached out to National Associations in a bid to coordinate joined up global activity to celebrate hockey on this day. Since then, details about all of their plans have been coming in. More than 40 countries have developed special hockey programmes for this year’s Olympic Day. Here are some of the highlights:

Afghanistan:
The National Hockey Association of Afghanistan has organised numerous hockey events on Olympic Day aimed at promoting their sport by involving schools, teams and their coaches and parents. With the support of their National Olympic Committee, their main activities will focus on Hockey5s events held in Kabul and Khust.

Brazil:
The upcoming Olympic Games in Rio have been leveraged in Brazil to promote hockey in five different states on the same day,including at the Olympic hockey facilities in Rio. Prominent support has come from the players of the Brazilian men's hockey national team that will represent Brazil in the Olympic Games. They will be involved in various activities, such as hockey clinics for children, teenagers, and adults.

India:
Hockey India has organised special hockey matches that will take place in all their member state units for participants from all walks of life, different ages, abilities and gender. It is about raising awareness of the Olympic Games; increasing participation in the sport; drawing people's attention to healthy lifestyles; and encouraging gender equality.

Pakistan:
Between 18 and 26 June, the Pakistan Hockey Federation has conducted a number of activities to support Olympic Day 2016.

Hockey5s competitions have been taking place at the National Hockey Stadium and the Hockey Stadium Johor Town, Lahore. Gold medallist Olympians and hockey world champions have strongly supported the project and acted as an inspiration and role models for the young athletes. Families have attended the matches along with officials from the Pakistan Olympic Association, media and government officials (including the Minister for Sports Punjab). The women's hockey team has also participated in the activities and encouraged young talent to adopt sports as part of their healthy lifestyles.

In addition to this, summer camps have been organised in Shahdrah town (Lahore), Shaikhupura city and in Sukkar District. In total, more than 2,000 local citizens will be targeted for the promotion of Olympic Day through hockey competitions and these summer camps.

In addition, Hockey5s tournaments will be organised in two rehabilitation facilities (Wazirabad and Karachi) for patients suffering from drug addiction. This is to provide those patients with a healthy perspective in a bid to divert them from drug abuse and, possibly, to become sources of inspiration for local citizens.

Qatar:
Level 1 Basic Coaching courses have been taking place from 18 June to 23 June, targeting more than 40 male and female physical education teachers. In addition to the course, participants were given the opportunity to learn, play and celebrate hockey during a tournament called “Challenge Cup”.

On the final day, Olympic Day, the new coaches will graduate and be equipped to start teaching hockey in their schools.

Vanuatu:
The Vanuatu Hockey Federation has planned a one-day tournament that will bring schools from eight different villages to the capital city. All teams will be of mixed gender (minimum of four girls per squad and two on the field at all times), all of whom will be aged 13 and under.

The competition will give participants the chance to compete against other schools for the first time and enjoy the excitement of competing and representing their school/town or island.

The Federation will also work closely with a local youth centre for underprivileged children who cannot afford to attend school. They will be entering a team. Educators of that same centre we will open the tournament with a educational session regarding health and nutrition.

A practice match of the national men's team, to showcase the sport at the top level to young people, will complement the day.

With only 42 days to go until the Rio 2016 Olympic Games, hockey fans also joined in the Olympic Day celebrations at the women's Hockey Champions Trophy taking place in London, Great Britain.

There, fans and athletes joined in a number of activities, including a giant crowd flag and as well as various social media activities with Olympians, past and present. You can see much more on the FIH Facebook, Twitter and Instagram channels.