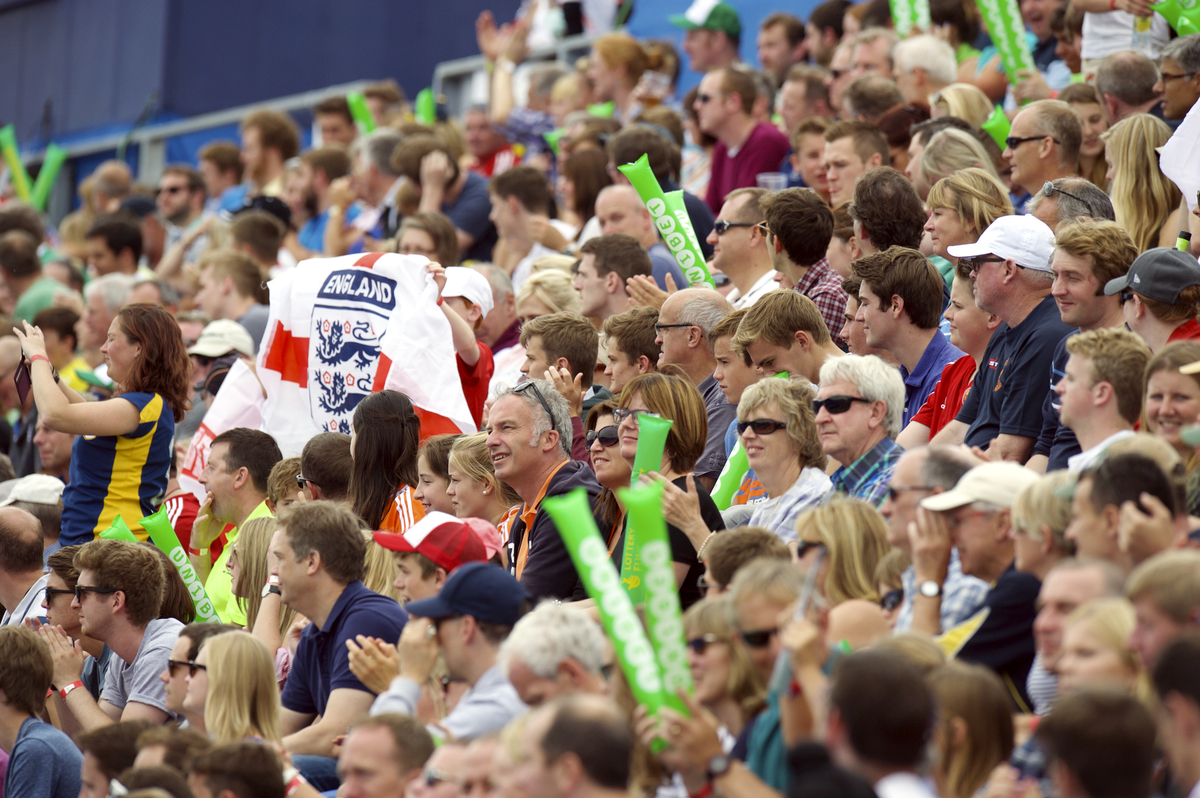 In August 2015, London welcomed elite hockey back to Queen Elizabeth Olympic Park as eight of the best men’s and women’s teams took to the field at the Unibet EuroHockey Championships 2015. This event was a great example of what the Hockey Revolution is aiming to achieve. England Hockey, along with their various partners, delivered a big, bold, packed and loud event that not only inspired those who witnessed it, but also other hockey event hosts who will strive to achieve similar success.

The hockey on display was world-class, with hosts England winning the women’s European title and Netherlands winning the men’s.

Whilst the on-field entertainment was exceptional, a huge amount of effort behind the scenes also went in to creating an extremely exciting and engaging event for spectators and fans.

Much of what went into this year’s Championships is a result of the London 2012 Olympics legacy. One of the success stories of the 2012 Games was the packed stands at the Riverside Hockey Arena. While many of the 15,000 strong crowds who flooded into the venue were hockey fans, many more were not. But they had initially been swept up in Olympic fever and once there, they were hooked.

With that success still fresh in their minds, the EuroHockey Championships mirrored the organisation at London 2012. However, there were some bold additions that made this year’s event unique.

Chief Executive of England Hockey, Sally Munday said: "We have taken some of the things we did in 2012 and repeated them - great stadium, opportunities for fans to get up close with their heroes and the fun zone. But we have also made this event more hockey specific, so we have an event village with lots of hockey stores on-site and great bars and catering, offering food from all our participating nations."

For England Hockey, to win the right to host the event, the organisation had to fulfill five main criteria. Angus Kirkland, Chief Executive of the EHF explains: “In order to win the bid, the host nation was asked to reach five major targets. Provision for the athletes was high on the agenda, but also on the priority list was fan engagement; television reach; a high standard of facilities for the media and securing the event's legacy.”

On this last point, Kirkland adds: “We believe that we have achieved these major targets and are sure that, as England Hockey are hosts of the FIH Champions Trophy next year, World League in 2017 and the Women's World Cup in 2018, they will build on the success here and put Lee Valley on the map as a world class hockey venue.”

Certainly, Munday and her team pulled out all the stops. A year and a half was dedicated to marketing the event. There was a dedicated event website and a sustained marketing push via partner channels. Paid-for digital marketing was also highly targeted at specific audiences.

Over the course of the 10-day hockey spectacle, more than 35,000 people poured into the stadium. As early as March, extra seating had to be added as all the tickets for the men’s and women’s finals had sold out.

”Our ambition was to run an amazing event that provided inspiring experiences for our fans and engaged with millions on TV and through the media," says Munday.

To this end, the marketing team made sure that what was viewed on screen was brightly coloured to reflect the cosmopolitan nature of the event. And for visitors to the venue, there was an emphasis on family and fans, in the form of a variety of largely hockey-based activities.

Communications Manager for England Hockey, Andy Brown, explained how they set about packing out the stands throughout the event. He said: “Due to the volume of matches (sometimes six a day), we sold tickets in half-day sessions rather than full-day. This allowed us to focus on home nation sessions in a more specific way, rather than with generic marketing messages.”

The final piece of the puzzle was the presentation of the event itself. Wherever possible there was a band in the stand; music was played whenever appropriate – to celebrate goals or significant moments in the match; audio information kept fans engaged during the game; and half-time interviews, plus entertainment, meant there was never a quiet moment in the stadium.