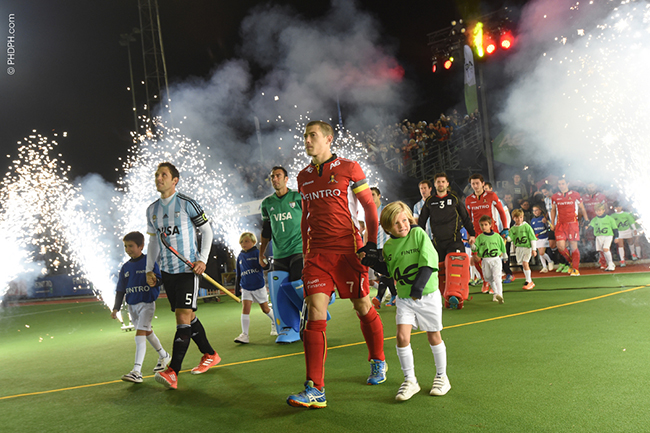 It was dubbed 'The Revenge Game’ and for the 9,200 fans packed into the Royal Uccle Sport Stadium in Brussels, Belgium, this was hockey at its best.

The capacity crowd, the atmosphere, the entertainment, the 2016 Olympic gold and silver medal winning Olympians showcasing their skills – this event was as big, bold, packed and loud as they come.

The match was a re-run of the Rio 2016 Olympic final between Belgium’s Red Lions and Argentina’s Los Leones, a match that Argentina won to take the gold medal on their home continent.

Then, the Red Lions had experienced the charged atmosphere of an Argentina-supporting South American crowd. Now it was the turn of the Argentinian men to feel the heat of the passionate European crowd.

Before the players had even entered the field the atmosphere was electric. A re-run of the Olympic Final on a big screen was followed by hockey animations on the pitch for the young hockey fans in the stadium, provided by long-term partner FINTRO.

Then the real action began as a spectacular pyrotechnics show announced the arrival of the athletes onto the field. The crowds went crazy as the Olympians – escorted by young fans – ran out to the soundtrack of ‘Sweet Caroline’.

For those unable to get into the stadium, the game was was shown live on national television and via online streaming.

The game itself was a real showcase for the sport. Belgium rushed to a 3-0 lead, with some spectacular goals, but Argentina rallied and soon got onto the score-sheet. The final 4-3 win to Belgium was yet another reason for the fans to sing and chant their heroes’ names.

The match was organised as a means for the Belgium Hockey Federation to thank the fans, the partners and the stakeholders for their support for hockey over the past few seasons, culminating in that historic first silver medal for the Red Lions in Rio.

Once the match was over, the stadium lights were turned down and both teams were invited onto a podium on the pitch. Gigantic flames and fireworks lit up the sky as the fans gave the players a tumultuous round of applause.

Retiring Red Lion Jérôme ‘Tchouk’ Truyens was honoured for his distinguished international career, while the president of the Belgian Federation, Marc Coudron paid tribute to outgoing FIH president Leandro Negre for his terrific work at the head of FIH.

As the party drew to a close, youngsters mixed excitedly with the players, collecting autographs and taking selfies. It's evenings like this that inspire the next generation of stars.

All in all this was a great example of creating innovative and exciting entertainment events, a Big Goal of the FIH's Hockey Revolution strategy.