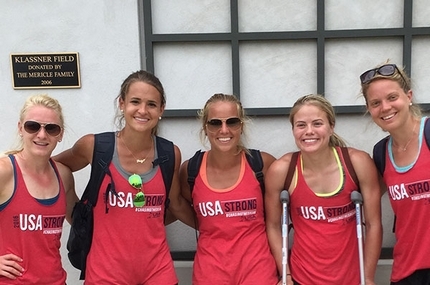 With the Rio 2016 Summer Olympics less than a year away, sportswear company Teamzila is helping the U.S. Women's National Field Hockey Team get in the spirit with a campaign called "Chasing the Dream".

The campaign is an exciting endeavor established to continue the celebration of the U.S. Women’s National Team and their qualification for the Rio 2016 Olympic Games. It will come to life with a year-long campaign geared toward getting to know the team and keeping the excitement alive through  multiple contests and challenges.

As an official sponsor of the team, Teamzila, an athletic lifestyle apparel company, is designing and manufacturing the campaign's apparel, which will have an official launch at the National Hockey Festival in Palm Springs, California, in November. Teamzila will also produce a souvenir programme book for fans that will feature team photos, player biographies and behind-the-scenes highlights from the team's journey to Rio de Janeiro.

The U.S. Women's National Field Hockey Team has been working with Teamzila for many years now and have always been on the escalator towards a sponsorship as the company became more and more involved with the team. It was their creative work when it came to apparel that really solidified the partnership as well as their time, effort and passion in building the campaign with the women's team.

Chasing the Dream merchandise — which currently includes shirts, tank tops and shorts — will be available for purchase on the company's website, with all of the proceeds going to the team.

A prime reason behind the Chasing the Dream campaign is to inspire young people to work as hard as Team USA has in order to make their own dreams come true.

The U.S. Women's National Team secured a berth at the Rio Olympic Games when it competed in the 2015 Pan American Games in Toronto.

“Teamzila is honored for the opportunity to capture the American spirit of hard work and determination these women have achieved,” said Laura Maring, Teamzila Owner. “The campaign apparel will help create a spotlight on the players reaching the Olympics and every young girl and boy that is dreaming one day of becoming an Olympian. It has a full circle message.”

“We are thrilled to be partnering with Teamzila for the Chasing the Dream Campaign," said Katie Naughton, USA Field Hockey Commercial Manager. "USA Field Hockey has worked with Teamzila for many years now and they constantly produce quality, unique apparel for our members. Laura and her team are extremely passionate about the sport, the organization and the dreams of our members at any level."