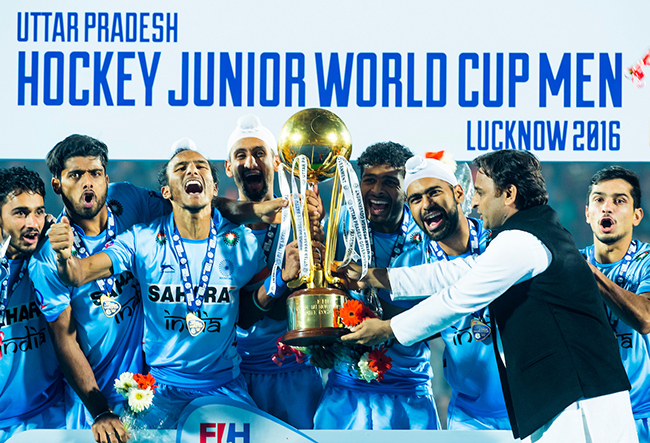 The Federacion Chilena de Hockey and Hockey India showed how its done as both hosts of the 2016 editions of the Hockey Junior World Cups secured substantial support from local partners.

With the International Hockey Federation (FIH) now giving hosts more flexibility in terms of sponsorship rights, including title sponsorship, both National Associations engaged with a number of local organisations and businesses who helped stage these two showcase junior events.

The hosts in Chile managed to secure title sponsorship in the form of 'Cereal Bar', one of the countries leading nutritional snacks. Their title sponsorship benefits included prime-advertising space around the field of play and space for fan activation in the spectator plaza.

They were supplemented by Banco Bice (finance), Kia (motoring), Clinica Alemana (medical), Casillero del Diablo (food & beverage) and Club Manquehue (leisure), all of whom also received advertising space as well as opportunities for fan engagement in and around the stadium as well.

With this event streamed and broadcast globally, this exposed all of these partners to a world-wide audience. Whilst some of these sponsors target markets were Chile, for international brands such as Casillero del Diablo and Kia, it was an opportunity to be associated with the prestige of hockey in many other countries around the world.

Hockey India also achieved remarkable success through their local sponsorship strategy. The most significant was through the Uttar Pradesh Government who secured title sponsorship, with support from the city of Lucknow. As a result the official event name was changed to the 'Uttar Pradesh Hockey Junior World Cup Men Lucknow 2016' and in addition to key advertising positions within the stadium they also benefited from the global reach of the event through extensive television and livestreaming coverage.

For the state of Uttar Pradesh, this offered much more than just an advertising opportunity. Hundreds, if not thousands of people visited the region during the event, including athletes, officials and spectators. These visitors spent money during their stay, therefore it was undoubtedly an economic boost for the state.

A supplementary benefit that other host regions or city's should also consider, is through visitors experiences. Through social media posts, photos and videos, these people inadvertently became tourism adverts for Lucknow, advertising the rich culture and warm hospitality experienced during their stay in India, action that could potentially contribute to a boost in tourism in the future.

For Uttar Pradesh - hosting the men's Hockey Junior World Cup was more than just putting their name to a prestigious international hockey event. It gave them the opportunity to showcase their city and their people to the world. With the hosts for the new FIH event portfolio now being sought for 2019-2024, this should give cities an idea of the benefits that international hockey events can bring to their country, both financially and in terms of image.

Other National Associations have also been busy over the last few months securing interesting partnerships with investors.

Shortly afterwards, the men's Asian Champions Trophy held in Malaysia saw QNET, one of Asia’s leading direct selling companies, secure title sponsorship of that event. Having invested in other sports organisations such as Manchester City Football Club and Formula 1, it was certainly a coup for the hosts and hopefully the start of a longer term partnership between QNET and the sport of hockey.

These latest partnerships are further evidence of the Hockey Revolution progressing well in regards to obtaining business partners who share hockey's vision and values - Optimistic, Progressive, Inclusive and Dynamic.

It is hoped that many of these organisations will develop their relationships over the coming months to forge strong partnerships for hockey for the future.