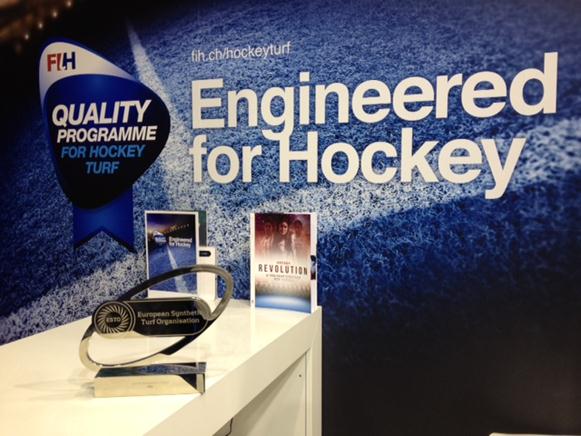 FIH, following the launch of it's new FIH Quality Programme for Hockey Turf, were delighted to receive a number of prestigious awards at a Trade Fair in Cologne, Germany, in October.

A Lifetime Achievement Award, as voted for by European Synthetic Turf Organisation members, was awarded to the FIH. This award celebrates the achievements of an individual within the industry or a Sports Governing Body who has been instrumental in the development of synthetic turf within their respective field; whose actions continue to create a positive impact and, in doing so, showcases the benefits of synthetic turf to a wider audience.

Upon presenting this award, reference was made to the first time a synthetic hockey turf was used at the Olympics, in 1976. FIH were also congratulated for their imagination and foresight in adopting synthetic turf in order to improve the sport as well as hockey's commitment to continual improvement and innovation in improving synthetic turf through the new FIH Quality Programme for Hockey Turf.

Alastair Cox, FIH Facilities and Equipment Manager, was also one of five individuals inducted into the newly formed European Synthetic Turf Organisation Hall of Fame, which recognises significant contribution to the development and progress of the synthetic turf industry over recent years.

FIH Official Supplier Polytan was amongst the winners as well as they were given an award for Innovation in Synthetic Turf in relation to the blue field at the London 2012 Olympics.

Speaking of this success, FIH President Leandro Negre said: "These awards are a reflection of all the hard work that both FIH, Alastair and our partners have put into the development of hockey turf. One of the values of FIH is to be progressive - innovative, smart and continuously improving. This is certainly reflected here!"

He continued: "Here at FIH, we believe that the quality of hockey facilities is really important to our long-term success. Hockey fields provide a platform for our sport to inspire the next generation, fueling the growth of our sport around the world. The progress that we have made in this area has been exceptional and I'm delighted that the industry has recognised our dedication to the development of synthetic turf."

This news following the recent launch of the FIH Quality Programme for Hockey Turf which is aimed at ensuring good quality hockey fields are built for all levels of play, from elite level competition to community development, around the world.

This internationally recognised quality-assurance programme provides consistent and dependable industry standards for the performance, construction and durability of hockey turf installations worldwide and ensures the appropriate quality for the intended level of play. For more information on this latest initiative, click here.