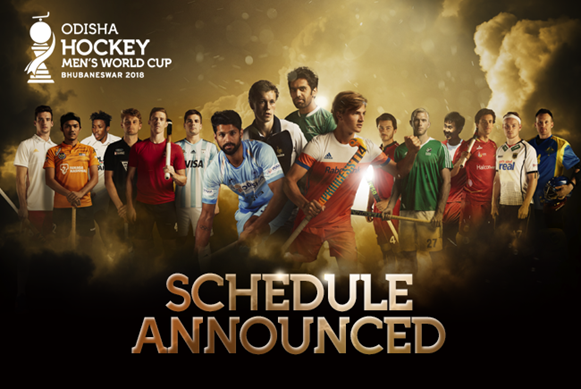 Find out who your team will play and when!

The International Hockey Federation (FIH) has announced the pools and match schedule for the Odisha Hockey Men’s World Cup Bhubaneswar 2018, taking place in India between Wednesday 28 November and Sunday 16 December 2018.

Over the course of the nineteen-day competition, sixteen of the world’s best men’s international hockey teams will take to the field at the 16,000 capacity Kalinga Stadium, a venue that is currently undergoing extensive refurbishment in preparation for what is certain to be a spectacular event both on and off the field.

The Odisha Hockey Men’s World Cup Bhubaneswar 2018 sees 15 qualifying nations join hosts India in the race for the title. The host nation were joined by teams who qualified thanks to their performances either at the last year’s Hockey World League Semi-Finals competitions in London and Johannesburg or by being crowned as continental champions.

The pool phase of the competition will take place from Wednesday 28 November to Sunday 9 December, with two matches per day being played at 1700 and 1900 India Standard Time (UTC +05:30) respectively. Each day of action will be pool focussed, with the opening day’s play featuring two matches in Pool C as Shane McLeod’s Belgium take on Canada before host nation India target a winning start when they face South Africa.

There are numerous eye-catching fixtures in the pool phase, including the mouth-watering Pool D meeting two former world champions in Germany and Pakistan on Saturday 1 December, Asia champions India taking on European giants Belgium on Sunday 2 December and England aiming to upset the odds against the mighty Kookaburras of Australia on Tuesday 4 December.

Following a rest day on Friday 14 December, a huge weekend of action will take place. The event Semi-Finals will be played on Saturday 15 December, with the bronze medal and the showpiece Final scheduled for Sunday 16 December.

The Odisha region and Bhubaneswar’s Kalinga Stadium are already familiar locations for Hockey fans. Not only did they successfully host the 2014 Men’s Hero Hockey Champions Trophy and, most recently, the Odisha Men’s Hockey World League Final Bhubaneswar 2017, it is also home to the Coal India Hockey India League franchise Kalinga Lancers, winners of the 2017 League title. Thousands of fans will descend upon the venue to share in the glory of hockey’s biggest event, where the men’s World Cup champions will be crowned and legends will be made.

For those who can't make it to the venue, this event will be broadcast to millions across the world in over 100 countries through FIH's global broadcaster partners.

The Vitality hockey Women's World Cup London 2018 will take place between 21 July and 5 August in England. Tickets for that event are still available. For more information, visit the Women's official website here.