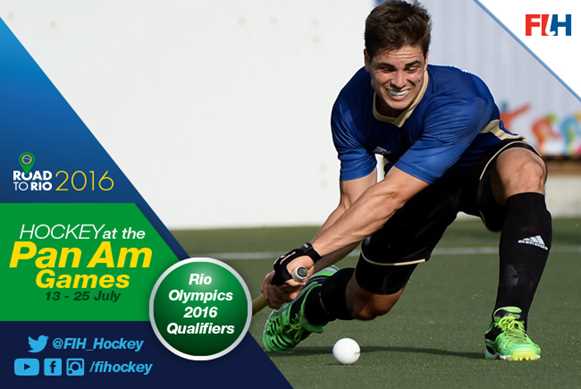 History repeated itself as Argentina beat Canada to take the gold medal at the Pan-Am Games in Toronto. Every final since the Games began has featured these two protagonists, with Argentina holding the bragging rights with nine wins to Canada's four.

Chile picked up bronze as they defeated Brazil 4-0, and earlier in the day USA beat Mexico 6-2 to take fifth spot, while Trinidad and Tobago won their match against Cuba take seventh place in the men’s competition.

Trinidad and Tobago opened their account in the fifth minute through Mickell Pierre. Just one minute later, Jordan Reynos scored from a rebounded penalty corner and Pierre doubled his tally in 13th minute. The second quarter saw Kiel Murray (20’), Pierre (26’) and Kristien Emmanuel (28’) all add their names to the scoresheet.

In the third quarter Trinidad and Tobago continued to pile on the pressure. Just 10 seconds after the restart, Dillet Gilkes scored his first, and he then added to his own tally two minutes later. Murray scored his second of the match to make it 9-0 and both Ishmael Campbell (43’) Stefan Mouttet (44’) got on the scoreboard to bring the score to 11-0.

Murray and Reynos scored again in the opening minutes of the fourth quarter to make the final score Cuba 0, Trinidad and Tobago 13.

USA men finished their 2015 Pan-Am campaign with a determined 6-2 win over Mexico.The hero of the hour was Will Holt, whose first half hat trick (3’, 11 and 17’), consisting of two field goals and a penalty corner meant that Mexico had a hill to climb to get back on even terms.

Edgar Garcia pulled one goal back in the 19th minute but the USA, through Michael Barminski (22’), responded immediately and the three goal cushion was restored. Edgard Boroquez scored on the stroke of half-time through a penalty corner to give Mexico a slender life-line.

Any hopes of a Latin American revival was effectively ended when Pat Harris (45’) and Tyler Sundeen (51’) scored from field goals following periods of intense pressure from the USA.

Chile made their intentions clear as they took an early lead in the bronze medal match against Brazil, with Nicolas Renz powering home a drag flick in the fifth minute of the match. The first quarter went very much Chile’s way, as they continued to pressure the Brazil goal, both with a number of penalty corners and through fast, attacking open play. Brazil’s keeper Rodrigo Faustino was called upon time and again, and early in the second quarter he made two crucial saves to keep his side in the contest.

However, the Chilean attack persisted and in the 19th minute Thomas Kannegiesser was rewarded for a well-placed shot from the top of the circle. A minute later, Chile won another penalty corner and Vincente Martin made no doubt as he struck home to give his side a 3-0 lead. Renz (32’) scored his second goal of the match and, despite a late flurry of attacking play from Brazil in the final quarter, the match and the medal went, deservedly, to Chile.

An intense match played in front of a packed stadium saw Argentina men repeat their feat of four years ago as they beat Canada 3-0 to regain the gold medal.

The first quarter was a cagey affair, largely played out in the middle of the pitch with neither side making a breakthrough. The second 15 minutes continued in much the same way until Argentina won a series of penalty corners and, from the fourth attempt, Pedro Ibarra broke the deadlock with a high drag flick past Dave Carter in the Canadian goal.

Lucas Vila doubled Los Leone’s lead in the 33rd minute as the Argentine side came out at pace after the half-time break. This lead would have been greater were it not for the incredibly high work rate of the Canadian defence led by captain Scott Tupper and Adam Froese. For the remainder of the third quarter, it was Argentina piling on the pressure against a resolute Camdian defence.

The pattern was repeated in the fourth quarter. Argentina came out of the break at speed and in the 47th minute were rewarded when Manuel Brunet beat multiple Canadian defenders before lifting the ball high into goal to give his team a three goal lead. Despite desperate attacking by the Canadians, there was no way back as Juan Vivaldi and his defence stood strong. The gold medal and Pan-Am title returned to Argentina as they ended the tournament undefeated. Despite not scoring in the final, Gonzalo Peillat was the tournament's top scorer with 15 goals.