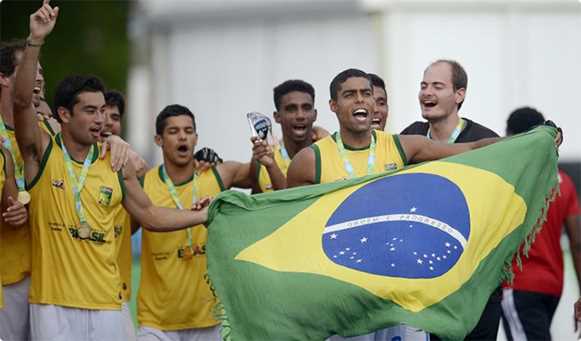 Hosts claim men’s title and Barbados top women’s podium, but the sport is the real winner at new venue in Deodoro Olympic Park

In the land where football is the number one sport, a new kid has just burst onto the block as the crowds flocked to the Deodoro Olympic Park to watch the culmination of the Aquece Rio International Hockey event. The tournament, which involved four men’s and four women’s teams, was a test event for the Olympics and, judging by the enthusiastic reaction, hockey will be a winner in 2016.

Brazil won the men’s event – beating Chile 3-2 in a shoot-out, after the match finished 2-2 and the speed, action and excitement of the game won over many new fans. Trinidad & Tobago took the bronze with victory over Mexico.

Importantly for the organising committee, the event allowed all the necessary elements of hosting a hockey tournament to be tested. Luciano Elias is the Rio 2016 hockey venue manager; “Everything that has to be tested has been approved,” he said. “The outcome was very positive and this is thanks to the integration of the teams who worked there. The players and the International Hockey Federation were very satisfied with the pitch and facilities.”

In the women’s event Barbados beat Peru 3-0 in the final, with Paraguay beating Brazil to the bronze. Claudia Ardiles, captain of silver medallists Peru, said: “The pitches are beautiful. Everyone who works here was very friendly and the organisation was superb.”

Brazil’s Stephane Vehrle-Smith agreed: “The venue looks very good already. Lots of people are on site every day trying to make it look and feel the part, so hopefully everyone who comes to visit will really enjoy their time.”

“It'll be very important for the Olympics to help boost hockey in Brazil. There are hockey projects which have been introduced in some of the poorer regions in the country and been really well received. I hope more comes from things like this and that more people pick up a stick and have fun.”

And FIH Sport Director, David Luckes, added: “What’s not to love about hockey? It’s fast, exciting, played by both men and women, it is easy to understand. We know that Brazilians love team sports, so we hope to have a lot of people coming out here to Deodoro to watch, be inspired by the hockey and hopefully take up the sport after the Games.”

In addition to the excitement, the test event welcomed special guests – reigning Olympic Gold medallists, the Netherlands women’s team, who visited the venue and trained on the new pitch on route to the Hockey World League Final in Rosario, Argentina which starts 5 December.