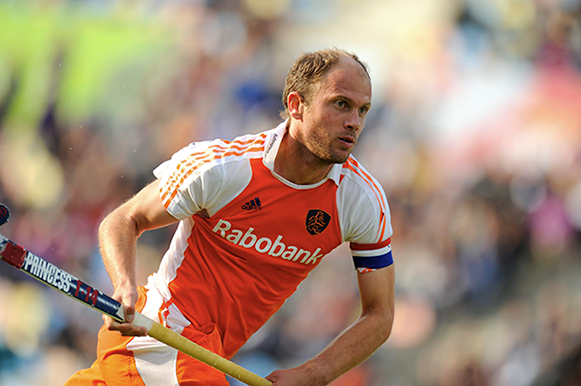 In the latest of our Olympic Reflections series, five-time Olympian Teun de Nooijer – the three-time FIH Player of the Year who played a world record 453 international matches, scoring 219 goals – tells the remarkable story of how the Netherlands bounced back from the brink of elimination at Sydney 2000 to claim a second successive Olympic gold medal.

The sensational Dutch attacker – winner of two gold (Atlanta 1996, Sydney 2000) and two silver (Athens 2004, London 2012) medals, and who is set to travel to Tokyo as an assistant coach of the Germany women’s team – talks about how his team almost blew their chances of staging a success defence of the Olympic crown won at Atlanta 1996 before eventually writing another famous chapter in hockey’s history books.

Your journey to winning your second Olympic gold, at Sydney 2000, was far from straightforward. Can you tell us about that?
Teun de Nooijer: “When I look back at that tournament, I think we had an unbelievably good team, and an unbelievably experienced team. At 24, I was the youngest on the team. There is no team now where that is the case, I think. We really, really struggled. We started okay but were a little bit unlucky as well because we scored a goal against Malaysia that hit the back-bar and came out, but the [umpire] thought it was against the bar. It was disallowed, and we had a 0-0 because of that. We dropped a lot of points, and then in the end, I think we needed a win against Pakistan. We actually played pretty well, creating a lot of chances but just didn’t score. Pakistan did, so we lost that game.

“After that, Germany needed to play GB [Great Britain]. Germany had a great team, so we all thought that we were out of the tournament, no semi-final place for us. Germany will win this game; it was a big chance for them to go through. But it just fell our way. GB won, with Callum Giles, the penalty corner specialist, having a chance five minutes from the end and he scored to make it 2-1. We were all in our little houses watching the game. Players from the team were already preparing to go out, because we were not having a semi-final, so we were going to go into town and have a beer! But then it just turned around. It was crazy.

“I’m proud because during the pool, we didn’t play to our max. But in the semi-final, we played a great game against the Aussies. It was 0-0 actually, and extra time, but in the end we won it with penalty strokes. But for the audience I think it was fantastic to watch, because it was really attacking style from the Aussies and from our side as well. It just went back and forth, but we both didn’t score, with 15,000 Aussies in the stands in Sydney [watching on]. Before the Olympics we really, really prepared ourselves for taking penalty strokes, and that helped us, because we needed to. We took five, and five went in and they missed one.

“In the final, against Korea, it was also a strange game. We were 3-1 up with four minutes to play, and then it was 3-3, so again extra-time and again penalty strokes. And again, we took five and all went in the net. They missed one, and we were Olympic champions. It was a crazy tournament where a lot of things went wrong as well – the energy amongst the staff and between the staff and the team just wasn’t good. There was some frustration and stuff going on, and that is why our focus occasionally wasn’t on the right direction, and we weren’t really a team. But still, the qualities in the team were unbelievably high, and what we did was play well in the semi-final and final, and that helped us in the end.”

Did you think that, with the Great Britain result against Germany, it was a second chance for you to go on and win the gold medal? Did it unite the team?
Teun de Nooijer: “Totally. We totally felt it was our second chance, and we had a long team talk about that and really said to each other: okay, this is it. Now we have a second chance, and we are going to grab this, one way or the other. Everything that had happened doesn’t matter anymore. We are here now, and we are going to grab this chance, and that is what we really did well.”

A video interview of Teun de Nooijer talking about finding both gold and love at the Olympic Games Atlanta 1996, where he met Germany international and future wife Philippa Suxdorf, can be found on Olympics.com by clicking here.