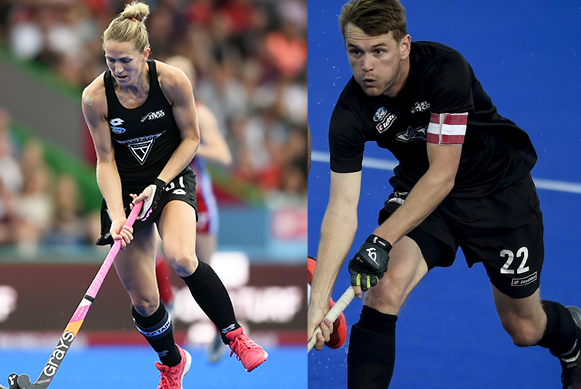 As part of our continuing build-up to the Olympic Games Tokyo 2020, today we cast New Zealand into the spotlight, a nation whose men’s and women’s teams will be fighting for the medals in Japan.

The Black Sticks women – lead by head coach Graham Shaw, the man who guided Ireland women to World Cup silver in 2018 – have been outstanding performers over the last decade, regularly getting themselves in contention for podium finishes. Fourth place finishes at the London 2012 and Rio 2016 Olympic Games split by a fifth-place finish at the 2014 Hockey World Cup has proven something of a frustration, but their gold medal success at the Gold Coast 2018 Commonwealth Games showed that they are more than capable of winning titles. The team once again found themselves sitting top of the podium in 2019, defeating host nation Australia at the Oceania Cup to guarantee their participation in Tokyo 2020.

Coached by former Black Sticks midfielder Darren Smith, New Zealand men – who shocked the world by becoming Olympic champions at Montreal 1976, the first Games to be played on a synthetic field – are renowned for their tireless team work ethic but are also blessed with some exceptional individuals. Stephen Jenness and Hugo Inglis are all wonderful attacking talents, while veteran defender Shea McAleese and penalty corner expert Kane Russell are consistently excellent performers. New Zealand reached Tokyo with two victories over Korea in the 2019 FIH Hockey Olympic Qualifiers, winning 3-2 and 3-0 in Stratford.

Ahead of their respective Olympic campaigns, we caught up with Black Sticks captains Stacey Michelsen and Blair Tarrant to get their thoughts about this hugely important competition. This interview was recorded prior to the confirmation of the recently concluded test series between New Zealand and Australia, and also the upcoming FIH Hockey Pro League matches, also against Australia, which take place later this month.

Stacey Michelsen, Blair Tarrant, thank you so much for talking to us! It may have been delayed by a year, but the Olympic Games Tokyo 2020 is just around the corner. Despite all of the challenges, you and your fellow Black Sticks players must be incredibly excited.
Stacey Michelsen: “Yes, I’m very excited. Obviously over the last few weeks the excitement has started to build, seeing more planning and hearing about the Games coming up. I think that is certainly allowing people to be more optimistic and excited about the Games.”
Blair Tarrant: “Really excited, as Stacey said. Really keen to get back into international hockey and get overseas, to be honest. To get travelling and play at the Olympics, it should be cool.”

It was a while back now, but can you tell us what it meant to you both when you secured qualification for Tokyo? For you, Blair, it was the FIH Hockey Olympic Qualifier against the always tricky Korea.
Blair Tarrant: “It feels like a lifetime ago, but it was a really cool experience, and it was quite unique, having to play two matches back-to-back and win on aggregate. We did well, so it was enjoyable.”

And for you, Stacey, it was an Oceania Cup victory that secured that ticket to Tokyo.
Stacey Michelsen: “That was a really special tournament for us. We still reflect back on that tournament as one that we really did enjoy, so I think we’ll be hoping to have more moments like that in the future.”

As always at an Olympics, every match is difficult! The focus will be all about getting out of those tough looking pools and into the quarter-finals. Stacey, your team take on Argentina, Australia, China, Spain and Japan, the hosts. It won’t be straight-forward.
Stacey Michelsen: “No, not at all. In either pool, they are both so tough. That is the amazing thing about an Olympic Games. You go there knowing that you are coming up against the best teams in the world. That certainly makes it nerve-wracking, but also very exciting. We are certainly trying to prepare for every one of those games.”

And Blair, your opponents are pretty similar, taking on Olympic champions Argentina, Australia, India, Spain and home favourites Japan. Any thoughts about those teams?
Blair Tarrant: “The main thought is probably that nothing is easy when you get to the Olympic Games. Our main thought is on the first match, so getting ready for India. It will be exciting playing them in those conditions, so India first up is our real focus.”

India are looking like potential medallists, so it will be a great first match for you guys.
Blair Tarrant: “Yes, and hopefully so are we, so it should be good!”

Those Oceania derby matches in Tokyo should be fun!
Stacey Michelsen: “I do really love playing them. It is always a really good game. They are quite similar to the style that we like to play, and I think that always makes it really exciting, fast-paced hockey. We are so close; you can never pick it. It is certainly a tough one that we do always look forward to.”

Blair Tarrant: “Yep, it is pretty exciting. We played them in Rio and they got the better of us, so it would be pretty cool to get the better of them at the [Tokyo] Olympic Games, so we are excited.”

Finally, what are your ambitions for Tokyo? Taking it one game at a time and see where the journey leads you?
Blair Tarrant: “For sure one game at a time, but there is no point going to the Olympics unless you want to win a gold medal. So that is our goal, but yes, one game at a time.”
Stacey Michelsen: “I definitely agree with Blair. You do have to focus on each game, and as we have already said, each game is so difficult. But we are definitely going to the Olympics to win a gold medal. We are very much looking forward to getting back in and playing international hockey again – that’s obviously a huge, exciting factor. We are not shying away from the fact that our first game back could be an Olympic match, and I think we are very excited about that.”