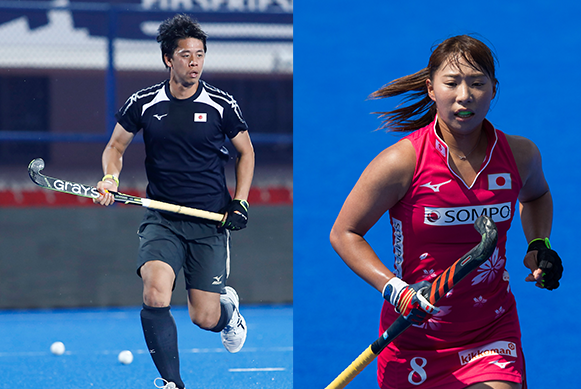 In the latest of our Olympic Spotlight series, we focus our attention on Tokyo 2020 hosts Japan, whose men’s and women’s teams are hoping to inspire the nation’s next generation of hockey players with their performances on home soil at the Oi Hockey Stadium.

Japan’s women claimed a remarkable gold medal success at the 2018 Asian Games in Jakarta, Indonesia, meaning that The Cherry Blossoms had effectively qualified for the Olympic Games Tokyo 2020 twice over, adding to the ticket already awarded as the host nation. The Asian Games victory – where they defeated higher-ranked India in the competition final – will have given the Cherry Blossoms a real taste for success, something they will be determined to replicate on home soil in Tokyo.

Like their women, Japan’s men already had a ticket to Tokyo 2020 before they stepped onto the field at the 2018 Asian Games. However, that did not stop The Samurais from earning an outright ticket by claiming gold ahead of four higher-ranked teams in India, Malaysia, Pakistan and Korea. It was an astonishing achievement for the team coached by former Dutchman Siegfried Aikman, who will be looking to weave his magic with the team as they target a podium place on home soil.

Japan stars Yukari Mano and Manabu Yamashita give their thoughts on the once in a life-time opportunity to take part in a home Olympics.

Yukari Mano, Manabu Yamashita – thanks for talking to us! How are you feeling about competing at the delayed Olympic Games Tokyo 2020?
Yukari Mano: “Among the situation of many different opinions towards the Tokyo 2020 Games being held, we express our gratitude to the people who have supported and gave the effort to make the Tokyo 2020 Games happen. Within this situation our team has worked hard and fought together. Through this experience, we believe that we have achieved the knowledge to tell a story. We hope to tell our story at the Tokyo 2020 Games.”
Manabu Yamashita:“From the postponement, I believe our team’s strength has risen. Our team had been in training for a long period of time. We hope to make the most of what we have achieved.”

What does representing your country at an Olympic Games mean to you, especially one being played at home in Tokyo?
Yukari Mano: “We will be ready to compete on behalf of our fellow Sakura Japan teammates whom we have fought together on this journey. Our goal is to leave behind a positive legacy for all the people who have supported us. As for the Olympics being held in Japan, I hope to take this opportunity to spread an awareness of the beauty of Hockey that I have given 16 years of my life to.”

Manabu Yamashita: “I am most honoured. This is a big chance for people to watch and bring awareness of Hockey at the Tokyo Games, therefore I hope to leave behind positive results.”

As always at an Olympics, every match is difficult! The focus will be all about getting out of those tough looking pools and into the quarter-finals. Which teams are you most looking forward to facing in your pool, and why?
Yukari Mano: “I look forward to each and every match. The first match [against China, on 25 July] will be the most challenging of all.”
Manabu Yamashita: “Australia, which is the very first match we will be competing in [on 24 July]. I look forward to playing against the world number one ranked team. We definitely want to win against Australia and pass the preliminary matches with the winning motivation.”

Finally, apart from winning an Olympic medal, what is your biggest hope for Tokyo 2020, and what impact can the Olympics have on helping the sport to grow in Japan?
Yukari Mano: “Through Hockey, although the difficult situation [regarding covid-19], I hope to move the hearts of the people who have believed in us. From this difficult situation, my goal is to inspire people through Hockey from the experience our team has achieved from not giving up hope to our goal. I truly believe that sport has a powerful energy to get people involved.”

Manabu Yamashita: “To leave behind a positive legacy and make Japanese Hockey a major sport. That is my goal.”

Visit the Watch.Hockey App to view the video interview in full.