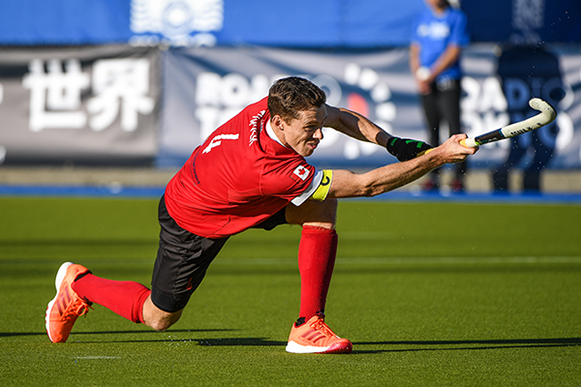 In the latest of our Olympic Spotlight series, we look at Canada men, who will make their eighth Olympic appearance in the same city they made their first.

The Red Caribou – who made their Olympic debut at the Tokyo 1964 Games – have long been one of the giants of Pan American hockey, becoming continental champions on no less than five occasions. They have yet to achieve an Olympic finish higher than tenth, but will be aiming to top that in Tokyo, having qualified by battling past Ireland in the 2019 FIH Hockey Olympic Qualifiers to achieve back-to-back Olympic qualification for the first time since the 1980s.

Ahead of his team’s Olympic challenge, we caught up with Canada captain Scott Tupper – the talismanic defender who has played over 300 times for his country – talk all things Tokyo 2020. The interview was recorded in April 2021.

Scott Tupper, thank you so much for giving us your time. The delayed Olympic Games Tokyo 2020 are on the horizon.  How is everyone in your camp feeling?
Scott Tupper: “First and foremost, just excited. There has been a lot of uncertainty since the initial postponement and through the rest of 2020. I think people’s focus almost got off hockey and the Olympic Games for a little time. There was probably still some uncertainty in late 2020 and early 2021, but now it’s all going forward, and we are back properly training, getting some proper competition in. Our group is just excited to get going and get into the summer.”

You have been lucky enough to have two Olympic tournaments under your belt, having competed at Beijing 2008, where you were very young, and Rio 2016. What were those experiences in Beijing and Rio like for you, and also, what does it mean to you to represent your country at the Olympic Games?
Scott Tupper: “For the last part [of the question], it’s a massive honour and something I am super proud of, to be able to represent Canada at the Olympic Games. For me, Beijing and Rio for me were very different experiences. As you said, I was very young in Beijing. It was the first major tournament where I was properly in contention to make the team, being part of the qualifying process. We qualified and I just thought, oh, this great news. You qualify and then you get to go to the big events. Unfortunately, we didn’t qualify for London [2012], so I think that, while I had a fantastic time in Beijing and absorbed a lot of it, I didn’t appreciate how special those moments are and that they don’t necessarily come again. [It was difficult] to miss out on London and have to watch that one from home. But then getting to Rio was fantastic. I had a different perspective on it, in terms of really soaking up all aspects of it. I had a little bit of a different role in the team, being one of the more senior guys. Using whatever wisdom I may have, I tried to impart some of it on the guys. I think we had a great time there, although didn’t quite do as well as we hoped we could. But now, going into Tokyo, we are super proud to have qualified again. It is the first time since the 1980s that Canada has made back-to-back Olympics, so I’m really excited for that.”

It was a while back now, but can you remember how you felt when you secured qualification for Tokyo, edging past Ireland in the FIH Hockey Olympic Qualifiers in Vancouver?
Scott Tupper: “It was a bit of a rollercoaster of emotions. That game was a unique one, having to come back [from behind] and some of the events of the actual match itself, all coming down to late in the game. I think it was an exhilarating experience, but kind of exhausting as well. I remember being really exited and proud of the team for the way we performed, to come back and to put ourselves in contention to have that opportunity late in the qualifiers. I was relieved and excited that we qualified in front of our home fans, with my wife, my parents and my in-laws all being on the side-line there. That was really cool. It was a really good moment for Canadian hockey, to have such an important event taking place right in the midst of our community, where a lot of us play our club hockey and a lot of the guys go to coach or train every single day. That was really special for us.”

In Tokyo, the focus will be all about getting out of a tough looking pool and into the quarter-finals. Canada are in Pool B alongside reigning World and European champions Belgium, multiple gold medallists Germany and the Netherlands, as well as Great Britain and South Africa.
Scott Tupper: “Yes, every match in the Olympics certainly is difficult! I think anyone looking at the pool will note that there is probably a group of four and a group of two, if you are just looking on typical form. We certainly have four powerhouses of World and European hockey in the group, so it is going to be difficult. But when you qualify for an Olympics or a World Cup, you look forward to playing the best teams in the world. I think Belgium have well and truly shown that they are the best team in the world recently, so it is going to be a great experience to play against them. The same with Germany, who are always capable at a big event of winning, the same with Holland and GB as well. For us and South Africa, we are probably both eying each other as the game we have to win, which is nice. We’ve always had some fairly tense games against South Africa, and we are looking forward to that one. Our mentality is basically going to be that we go into every match in the pool play to be as competitive as possible. And, well and truly, if you have your best day possible and a team that is higher ranked doesn’t have their best day, you have an opportunity to take points. Maybe it’s a couple of really good individual efforts; maybe it is a good goal-tending performance or a defensive performance. But if you can put yourself into that position, to be competitive every time you walk out onto the field, you never know what is going to happen. You have to play the game. We’ll see how it goes, but we are certainly excited to play those matches, for sure.”

So on that, is the strategy the old cliché of taking it one game at a time and see where the journey takes you?
Scott Tupper: “Yes, I think so. You mentioned it earlier, getting into that top four [in the pool], into a quarter final, is certainly a goal for us. Our best placement at an Olympic Games is tenth position, so if we can get into a quarter-final it would be the best performance by the Canadian men’s team ever, and we would love to do that. But I do really think it is one game at a time, and not letting say a tough match at the start of the tournament roll into the next game. Ultimately, it is possible that you could get through with two good results. We’d love to have more than two, but we really need to make sure that whether the previous game has gone well or not so well, we put it to bed and have a good game plan ready to go in order to be ready to seize any opportunity that might present itself.”

On a personal note. After the Olympics are done and dusted, what is next for Scott Tupper? Is It retirement or will you keep doing what you do?
Scott Tupper: “It is a good question. I have started my transition a little bit. I coach collegiately in the United States, actually. My employer has been super flexible with me in my ability to prepare for the Olympic Games, which has been fantastic. To be perfectly honest, I don’t know. I’d rather not have an end in mind. Maybe Tokyo is my last event; maybe not. There is the Pan American Cup in January 2022, which will serve as a World Cup qualifying tournament. If I can still help the team and the coaches think I still provide value, I perhaps have the opportunity to help the team get to the next major event. I think it is a really big piece for Canada to be able to continue to qualify for the Olympics and World Cup, the premier events in our sport, so you never know. Every time you sit back after a big tournament to reflect, all of a sudden, the next big tournament is just a couple of months down the line. Then you think, maybe I just need to lace up my shoes again and get back out there. We’ll see, I’m not totally sure.”

Well, whatever you decide, you have been a fantastic servant to the sport. We wish you all the best for Tokyo 2020.
Scott Tupper: “Thanks so much.”