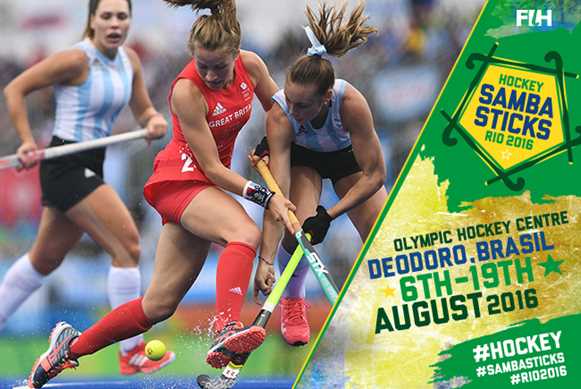 Great Britain achieved the stand-out result of day five with a stunning win against higher-ranked Argentina on a day in which four teams confirmed their places in the Quarter-Finals of the Rio 2016 Olympic Games.

Reigning Olympic and World champions the Netherlands (FIH Hero World Ranking: 1) continue to lead the way in the Pool A standings but were given a stern test by Beijing 2008 Olympic silver medallists China (WR: 6) before eventually taking a 1-0 win thanks to a late strike from Kitty van Male. A strong defensive performance put China within touching distance of a point against their illustrious opponents before Van Male struck with one minute of the match remaining, putting the Beijing 2008 and London 2012 Olympic gold medallists into the Quarter-Final with two matches to spare. A win for China in either of their last two Pool A matches would be enough for them to secure a place in the last eight.

Earlier in the day, Germany (WR: 9) continued their impressive start at Rio 2016 by claiming their second win of Pool A, defeating Asian champions Korea (WR: 8) 2-0 to book their place in the Quarter-Finals. The match seemed to be heading for a draw until two goals arrived in the final five minutes, with Hannah Krüger and Lisa Altenburg both hitting the target as Die Danas held onto second place in the Pool A standings. Although a top four placing in the pool is now guaranteed, they will be determined to claim a top two finish in order to avoid the highest Pool B finishers in the Quarter-Final crossovers.

New Zealand (WR: 4) finished the day occupying third position in Pool A thanks to a hard-earned 2-1 win over Spain (WR: 14). Kelsey Smith scored both goals for the Black Sticks, with Carlotta Petchame grabbing a late consolation for the Red Sticks. New Zealand sit six points clear of bottom sides Spain and Korea, and are looking good for a place in the Quarter-Finals. Barcelona 1992 Olympic gold medallists Spain need to defeat both Germany and Korea in their two remaining pool matches if they are to have any chance of reaching the last eight.

In Pool B, Great Britain and USA continued their imperious form by recording third successive wins to guarantee their respective places in the Rio 2016 Quarter-Finals.

Two goals from Helen Richardson-Walsh helped Great Britain (WR: 7) storm into a 3-0 lead against higher-ranked Argentina (WR: 2), although two goals in two third quarter minutes from Las Leonas star Florencia Habif set up a thrilling final period. Despite Richardson-Walsh missing a penalty stroke that would have sealed her hat-trick, Great Britain hung on for a superb victory over the 2016 Hockey Champions Trophy winners to finish the day with a maximum nine points from three matches.

Speaking after the game, Helen Richardson-Walsh said: “Beating a team like Argentina gives us a lot of confidence. I don't think we're firing on all cylinders yet. Obviously they came back, but towards the end of the game it felt pretty comfortable and so we can take a lot of confidence from that. However, this tournament, with the quarterfinals, once you get to those games anything can happen.”

Like Great Britain, USA (WR: 5) have been absolutely sensational at Rio 2016 and sealed their place in the Quarter-Finals with a third straight win by thrashing Japan’s Cherry Blossoms (WR: 10) 6-1. Katie Bam scored a hat-trick as the team coached by Craig Parnham dominated from start to finish. The result put USA onto nine points, ahead of Great Britain courtesy of a marginally superior goal difference.

Remarkably, both Great Britain and USA are six points clear at the top of the Pool B standings with two rounds of matches to play, meaning that a top two finish is highly likely. The two sides face each other on Saturday (13th August) in a match that is likely to decide who takes that crucial first place finish in the pool.

Australia (WR: 3) were also in action on day five, and finally found their form with a thumping 6-1 triumph over India’s Eves (WR: 13). Five different players scored for the Oceania champions, with Jodie Kenny (2), Kathryn Slattery, Georgina Morgan, Jane-Anne Claxton and Georgie Parker on target. The result gave the Hockeyroos their first points of the competition and saw them finish the day sitting third in Pool B, ahead of fourth placed Argentina – who they face on Thursday (11 August) – on goal difference.