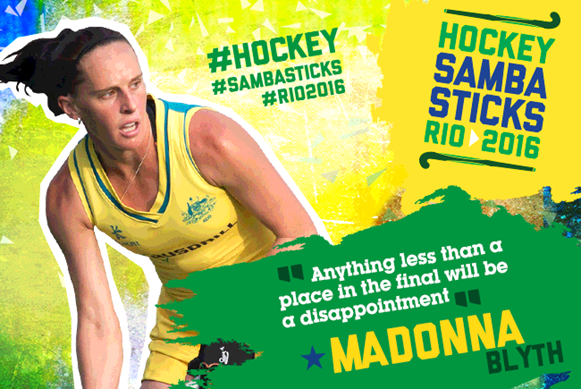 The Australian captain is playing in her third Olympics as the Kookaburras head out to Rio 2016, but as the straight-talking midfielder says, "things feel a lot different this time around."

"In London 2012 it was very different. We finished where we deserved [fifth place]. Strangely, we only conceded two goals in the tournament but we were far from clinical enough in front of goal. We weren't bad, but we are in a very different place now. We are playing a different brand of hockey, which allows us to dominate a game more. We play with more speed and that was something we lacked four years ago.

"We certainly have high expectations of Rio, for us anything less than a place in the final will be a disappointment. We are now playing at a level where we would expect to be in the big matches at every tournament. At the past few Olympics that hasn't been the case, but we have been building towards that during this Olympic cycle."

For the Hockeyroos, the Champions Trophy, where they finished fourth, was the final opportunity to pit themselves against top quality opposition. For Blythe it was the perfect event to test themselves in the heat of competition. Selection followed just a week later, although at the time of this interview, Blythe wasn't expecting surprises.

"The team in London is basically the team we will take to the Olympics. There are 18 here and I would expect only a couple of changes to the squad that will go to the Olympics. This has been a chance for players to put their hand up and make sure they secure that spot. Before this tournament there were some tense players but, since arriving in London, the team relaxed and began to play with freedom. People are taking on the challenge. At the moment we are in a very good spot."

Australia suffered some setbacks in the Champions Trophy, particularly a draw against USA, which the captain feels they should have won and a loss to Argentina. "It is hard when you lose to stay positive but, looking back, we played very well against USA and should have won. We played extremely well to beat New Zealand and then suffered a loss to Argentina in a game that could have gone either way.

"It highlighted the fine tuning that we need in the next few weeks, particularly being clinical in our finishing, but the team is not too far from where we want to be."

If Australia do find themselves in the Olympic final, there is a good chance they will be facing an old nemesis – the Netherlands. Blythe agrees that the Hockeyroos have come up short against the world number one side in the past. "We have lost out to them on too many occasions. What we have learnt, particularly over the course of the Champions Trophy, is that we need to put enough pressure on them so they cannot play as they want to. They love playing their way and they don't like it when you come out and stop them playing their way. Our challenge is to match them all over the field."