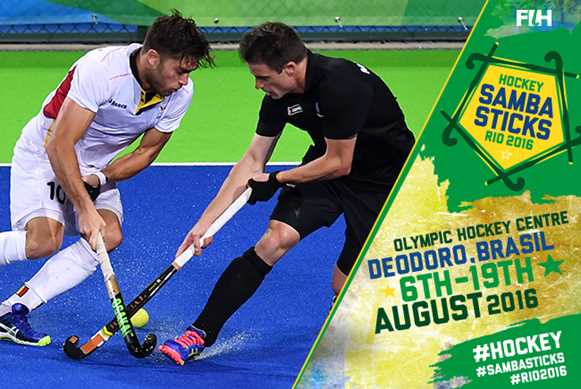 Rio 2016 (men): Netherlands and Australia to meet in Quarter-Finals

After seven days of thrilling, high quality hockey action at the Rio 2016 Olympic Games, the line-up for the Quarter-Finals of the men’s hockey competition is now known.

The Red Lions of Belgium finished as winners of Pool A and will now face Asian champions India, who finished fourth in Pool B, in the knock-out phase.

Pool B winners and reigning Olympic champions Germany will take on Pool A’s fourth-ranked team New Zealand, who recorded a stunning victory over Belgium in their final pool match to secure a Quarter-Final place ahead of Great Britain.

A second place finish in Pool A has earned Spain a last eight meeting with Pan American champions Argentina, who finished third in the Pool B standings thanks to a narrow 3-2 win over Ireland to deny their opponents a place in the knock-out stages.

The stand-out match of the Quarter-Finals sees reigning World champions Australia facing European champions the Netherlands, which will see the two top ranked teams in world hockey go head-to-head in a re-match of the 2014 World Cup final.

The Quarter-Final matches will all take place on Sunday 14th August, with Spain playing Argentina at 10:00 Brasilia Time (GMT / UTC -3) before Belgium and India take to the field at 12:30. The Netherlands versus Australia match will start at 18:00, with Germany taking on New Zealand at 20:30.

All twelve teams were in action on the final day of pool play at the Deodoro Hockey Centre, and the result of every fixture significantly impacted the Quarter-Final line-ups.

In Pool A, Great Britain (FIH Hero World Ranking: 4) went into their match against high-flying Spain (WR: 11) knowing a positive result was required if they were to have any chance of reaching the Quarter-Finals ahead of New Zealand (WR: 8). Their chances were hit when Spain’s David Alegre scored a brilliant chipped effort nine minutes into the match, although Sam Ward soon restored parity with a smart tip-in at the end of the first quarter. Despite long spells of pressure, Great Britain failed to get the win they needed, meaning that they would have to wait until the result of New Zealand’s match against Pool A winners Belgium (WR: 6) before knowing their fate.

Sadly for the Brits, it was not the outcome that they needed, as the Black Sticks produced their best performance of the competition to power to a 3-1 win over the Red Lions. Team captain Simon Child opened the scoring just after half time before Nick Wilson and Hugo Inglis fired home to seal New Zealand’s ticket to the Quarter-Finals.

World champions Australia (WR: 1) completed the Pool A action with a comfortable 9-0 win over host nation Brazil (WR: 30), with Glenn Turner scoring a hat-trick as the Kookaburras secured third position in the pool standings. Although the Aussies are yet hit the kind of form that they are capable of, a mouthwatering Quarter-Final against the dazzling Dutch is likely to bring the best out of them.

In Pool B, Germany (WR: 3) continued their sparkling form at Rio 2016 with a superb 2-1 win over European champions the Netherlands (WR: 2), a result which put Die Honamas at the top of the standings over their opponents. Goals from Florian Fuchs and Mats Grambusch put the Beijing 2008 and London 2012 Olympic gold medallists into a 2-0 lead before Seve van Ass reduced the deficit going into the final quarter of the match. Germany goalkeeper Nico Jacobi produced a number of brilliant saves in the dying stages to give his side a crucial win over a team that defeated them 6-1 in the final of the EuroHockey Nations Championship last summer.

Earlier in the day, India (WR: 5) were held to a 2-2 draw by Canada (WR: 15), who claimed their first point of the competition thanks to a double strike from Red Caribous team captain Scott Tupper. Akashdeep Singh gave India the lead in the 33rd minute only for Tupper to level almost immediately with a penalty corner. Ramandeep Singh put the Asian champions back in front before Tupper scored another set piece to ensure that their competition ended on a positive note.

Although India had already qualified for the Quarter-Finals, their final placement in the Pool B standings would not be known until after this evening’s Argentina (WR: 7) versus Ireland (WR: 12) match. Argentina needed a victory to move ahead of India into third position in pool, crucial if they were to avoid a fourth place finish and a subsequent meeting with Pool A winners Belgium. Ireland came into the match knowing that a win against Los Leones would secure a remarkable Quarter-Final place for a team playing in its first Olympic hockey competition for 108 years. The Green Machine produced a valiant performance, twice levelling the scores through John Jermyn and Shane O’Donoghue, but two goals from penalty corner ace Gonzalo Peillat gave Argentina a 3-2 win to take their place in the Quarter-Finals and break Irish hearts in the process.