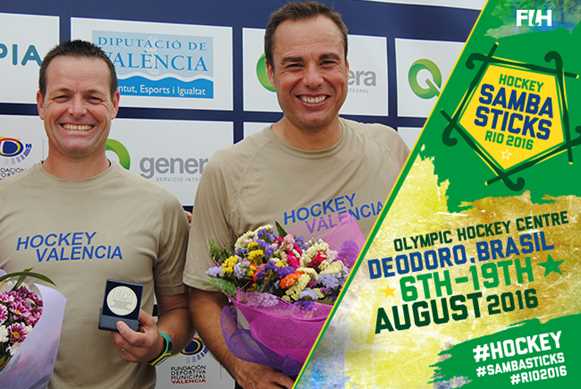 John Wright of South Africa has become the fourth umpire to join the 200 club, just weeks before he steps onto the pitch in Rio to umpire at an incredible fifth Olympic Games.

The second day of competition at the recent Men’s Six Nation Invitational Tournament in Valencia, Spain was a day of milestones and celebrations as in addition to Wright's cap milestone, Spain’s Paco Vazquez umpired in his 100th senior international game.

The two men received their awards – John a silver plaque and Paco an FIH Golden Whistle – after they umpired the match between Germany and New Zealand.

The two men will be part of the same umpiring team later this year as they have both been selected to officiate at the Rio Olympics. While John is a seasoned Olympian, Paco will be making his debut Olympic appearance.

John began his international umpiring career 20 years ago, becoming a Grade One umpire a year later and reaching World Panel Umpire status in 1999.

He was awarded his golden whistle 10 years ago and, with this award, he becomes only the fourth umpire to ever reach 200 matches.

The other members of the 200 club are John’s fellow South African Marelize de Klerk, along with Alain Renaud of France and Santi Deo of Spain.

Paco’s international career took off in 2002 and during that time he has umpired at one Hockey World Cup (2014) and three Hockey Champion Trophies (2010, 2012 and 2014). He is the 37th umpire to receive the coveted FIH Golden Whistle, and the third umpire from Spain to do so – with Deo and Xavi Adell.

Talking about umpiring, John Wright, who works as a Senior Sport Organiser at Tshwane University of Technology in South Africa, said: “While most umpires enjoy the thrill of being on a hockey pitch, I enjoy reflecting on my performance after the fixtures. Umpiring has taught me how to manage and resolve difficult situations in life. It requires great mental strength, tenacity, and a clear thought process.”

The veteran umpire added that he would be working hard on his fitness over the coming weeks to make sure he was absolutely ready to meet the challenges of a fifth Olympic Games.

After receiving his Golden Whistle, a delighted Paco tweeted: “So honoured to officiate my 100 caps today. Working and perseverance gets nice achievements.”

And congratulations for the two umpires were free flowing from players and umpires. Jamie Dwyer, who will be going to his fourth Olympics this year, said: “Congrats to South African hockey umpire John Wright on umpiring his 200th international game!!!”

As befits a man who has four Olympic Games already under his belt, John has a clear idea of what the umpires are trying to achieve. He said: “Our job is to keep the players on the field. We try to ensure that the game is fair and the spectacle it should be. The skill of the players should be protected and it must be a good game for players and spectators alike. I like to think it is not us and them, between us and the players, but we are all working together to put on a good game.”

You can watch both umpires in action at the upcoming Rio 2016 Olympic Games. To find out more about the hockey events there, click here.