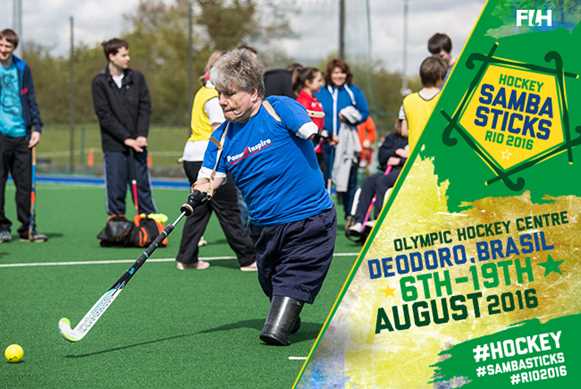 With seven men’s teams, five women’s teams, more than 350 juniors and a thriving Masters section, Cambridge City Hockey Club is clearly giving something back to the community.

However, earlier this summer a new level of inclusivity was reached when the club combined forces with Cambridge University Sports Department (CADMuS) and John Willis, founder and CEO of Power2Inspire, to hold an inclusive Festival of Hockey.

John Willis himself is an inspirational figure. Born without forearms or lower legs, he has never let his disability stand in his way.

When John contacted Andy Richardson – chair of Cambridge City Hockey Club – and club coach, Olympian Nicky Thompson to explain that he was taking his own Road2Rio, by playing every sport that would feature in both the Olympics and Paralympics, the club chairman jumped at the chance of getting involved.

The Festival of Hockey would provide a great opportunity for Willis to tick the ‘hockey box’ on his Road2Rio. Cambridge City had already become involved in inclusive hockey activities via a programme it had run the previous year in conjunction with the FreFlyerz, but this was a whole new adventure.

The serious aim of Power2Inspire is to use sport as a vehicle for inclusion and integration, no matter what your ability.

While preparing for the Festival, John had a hockey stick clamped and taped to his right arm socket, however he soon discovered the stick twisted as he hit the ball, so some emergency engineering work was carried out and a thin metal rod inserted into the middle of the stick and glued in place. “I found I could push the ball pretty hard once the stick was attached to my arm,” said Willis.

Talking of his experience, Willis says: “Once my stick was sorted, we had an inclusive game. There were former internationals on both sides and also novices and me.

"It was great fun. My team tried their hardest to put me in position to score. I did twice, though I accidentally followed through on one and scored a direct hit on one of my own players. My teammates tried so hard to put me clear but if they pushed it left I went right and if I went forward, it went behind me!  It was almost telepathic how accurately wrong I was.

“But I did improve, in fact Darren Cheesman said: 'He can generate some real power with that!' which chuffed me enormously.

“Andy Richardson, Chair of the club, and in my mind a modest superstar, has championed inclusion at the club. He is passionate that a club can push its elite players at the same time as encouraging all to join in. His views so thoroughly reflect our goals at Power2inspire, we can but applaud and support him every step of the way.”

After the match, Willis was presented with a club shirt. With Rio 2016 just around the corner, there are a few sports left on his ‘to-do’ list, but the determined sportsman is certain that come the start of the Paralympics he will have nailed them all.

Speaking after the Festival, Richardson, who is brother to Great Britain star Helen Richardson-Walsh, said: “When I first sat down with Nick Thompson five years ago, we said that we wanted to create a place where all ages and abilities could enjoy playing hockey in a safe and welcoming environment, today was just about that.”

This activity is in line with the FIH's 1-year Hockey Revolution strategy which aims to make hockey a global game that inspires the next generation. For more information on the strategy, click here.