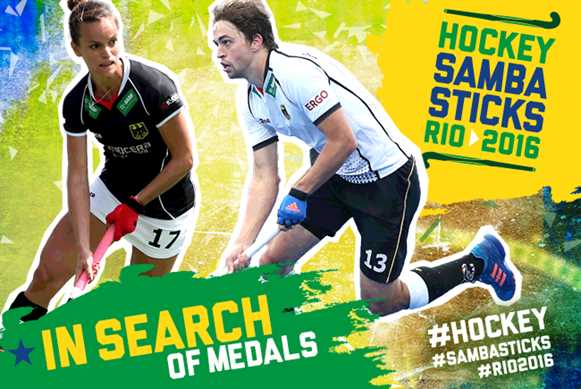 Since London 2012 the German men’s and women’s hockey teams have been through some changes and, for both teams, some tough times.

For the men, a 7-1 defeat at the hands of Netherlands in the Unibet EuroHockey Finals was a moment in history they will want to forget, while the women’s eighth place finish at the Hockey World Cup in 2014 was their wake-up call.

But this is Germany and when things go wrong, the first instinct is to seek a better way of doing things. After all, the men are reigning Olympic champions and will not relinquish that crown easily. This is why veteran campaigner Moritz Fuerste now finds himself at the heart of central defence alongside Martin Haner – the first time he has played this role. Fuerste is also the captain, chosen by the squad rather than the coach, which is another break from the past.

For Fuerste and many of the his teammates, Rio 2016 may prove to be a swan-song. Tobias Hauke, Haner and Linus Butt may retire and, with Jan-Philip Rabente not part of the squad and Oliver Korn and Oscar Deecke as reserves, the old order is changing.

Coach Valentin Altenburg has not been afraid of mixing things up with his squad and making changes. The excitement around this German team lies in the forward line. Christopher Ruhr is now a recognised world-class striker but among the fast, skillful forwards a new star is emerging in the shape of Moritz Trompertz, a player who has been impressing ever since he played a pivotal role in Germany’s gold medal winning Hockey Junior World Cup team.

For the women, the changes have been more intense, more about culture-challenging.

When Jamilon Mülders arrived as Head Coach in 2013 he wanted to take his time about imposing new ideas on the squad. He said: “I wanted to get to know them, they had to get to know me." But now the changes are there for all to see. “We had to change not just things from the past two years, but the way things had been done for the past 20 years.” For Mülders, that meant getting the players to think for themselves rather than relying on the coach to tell them what to do.

“It has been a long process because the players were not used to this, but we wanted to give them far more responsibility.” he explains. “I step back and have an overview. Some players really didn’t like it but it has changed how we are as a team.”

After a series of matches in the run-up to Rio, Germany has only been beaten by the Netherlands. For Mülders the change has been in body and mind. His players are much, much fitter than at any time since he took over the reins.

For the coach, the Argentina Hockey World League Finals in Rosario provided a pivotal point in the transformation of the team. “We were super lucky that we finished third because between games we had a lot of serious talks and it was exhausting. We stripped things right back and were very honest with ourselves. If we had lost, then the players might not have believed in the changes we were making, it is easier to get people on board when you are winning.”

There is some exciting young talent on the German roster. Charlotte Stapenhorst and Nike Lorenz are two players who have caught the eye with their ability and attitude, but it is the whole team that seems to have become rejuvenated in recent months as Mülders has pushed the agenda of giving players responsibility.

While the whole squad is fitter and playing with a new verve and energy, the player that Mülders singles out for praise is Julia Muller. “Julia had a series of setbacks with injuries last year, but when we talked about the future, she said: ‘Show me your ideas and then let’s get on with it.’ For me, that shows her strength of character and the outcome was a tremendous success. But really, I was not surprised that Julia has committed to Rio and beyond, she loves the sport, she is a true professional and she has a great passion for hockey.”

The German women’s team go to Rio in high spirits. The squad has been named since May, with the only change since then being the absence of Eileen Hoffman, who has torn her cruciate ligament. But Mülders is keeping a lid on expectations. “In Rio you will see a new style of hockey from us. It is not job done, but it is close to. Rio is important, but we have always said this is a long term project.” He smiles a little ruefully: “People want long term success, but sometimes you need short-term success to be allowed to get there.”