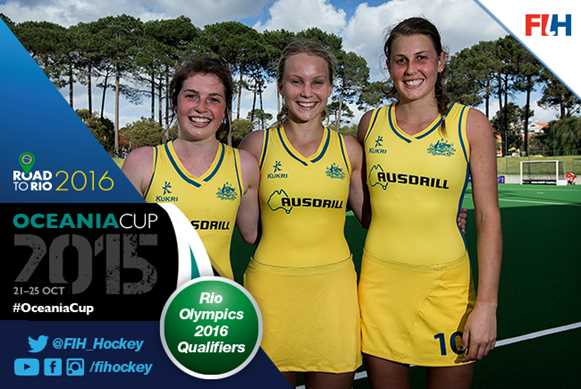 The two squads were selected following the conclusion of the Australian Hockey League (AHL) events in Sydney and Darwin at the beginning of October.

Hockeyroos Head Coach Adam Commens and selectors have named a squad brimming with technical ability, including the three young athletes that made their senior international debuts against Korea in Perth last month.

Queenslanders Madison Fitzpatrick (right of picture above) and Stephanie Kershaw (centre of picture), and Victorian Laura Barden (left of picture) all made their international debuts in the September series and featured in the women’s AHL grand final between Queensland Scorchers and Victorian Vipers.

Captain Mark Knowles missed the 2013 tournament through injury, acting instead as assistant coach to Graham Reid that year. Knowles will lead the Kookaburras on the field in Stratford and is joined in the squad by experienced teammates Jamie Dwyer, Eddie Ockenden, Fergus Kavanagh and Chris Ciriello.

In all, 11 members of the Kookaburras’ World Cup winning squad will make the trip to New Zealand.

New South Wales forward Blake Govers is one of five players under the age of 22 included. The 19 year-old was top goal scorer at the AHL with ten goals and won the Best Young Player and Top Scorer awards at the World League Semi-Final in Antwerp, Belgium.

The Kookaburras won that event back in July and in doing so guaranteed their qualification for the Rio 2016 Olympic Games.

Defender Joel Carroll is in line to make his 100th appearance for the Kookaburras as he enters the competition on 98 games.

Western Australian goalkeeper Tristan Clemons has replaced ACT goalkeeper Andrew Charter who was recently ruled out with a hamstring injury. Clemons, from Bunbury, was part of Tasmania’s bronze-medal winning team at the AHL a few weeks ago, playing as an inter-state import.

Senior Assistant Coach Paul Gaudoin will lead the Kookaburras at the Oceania Cup. He said the mix of experienced senior athletes with a youthful front line is exciting for the future of Australian hockey.

He said: “This is a strong squad. I like the youth in our forward line – the likes of Blake Govers, Flynn Ogilvie and Tom Craig. We’re giving them an opportunity to step up and push for selection for a major championships. If we don’t give them these opportunities now it’s hard to know how they’ll cope with something like the Olympic Games."

He continued: “It’s no different to what we would normally do outside of a World Cup or Olympic Games. We’re still developing as a group and building for sustained success.

“Josh Beltz is someone we identified last year after he had a tremendous AHL and performed well in our national junior programme. We’ve been really impressed with his progression, he’s certainly a long term prospect who warrants the opportunity to play for inclusion in our Olympic training squad next year.”

The Kookaburras will open their Oceania Cup campaign against Fiji before taking on New Zealand’s Black Sticks and Samoa.

The Hockeyroos squad comprises 14 of those that earned Australia’s women Olympic qualification with a third place finish at the World League Semi-Final tournament in Antwerp. The youthful group includes seven players under the age of 22.

One of the more experienced members of the group, defender Jodie Kenny, is in line to make her 150th appearance in the final game of the Hockeyroos’ tournament.

“We feel this is our strongest team at the moment on form. Those players we’ve selected have performed well at the AHL and in the Korean series and national camp previously,” said Adam Commens, Hockeyroos coach.

“The Oceania Cup is a really important tournament for us. It’s a continuation of our preparation for next year’s Olympic Games and there are vital world ranking points at stake.

“We will field a young midfield with Brooke Peris, Jane Claxton and Mariah Williams all naturally quick athletes with the pace to combat New Zealand’s speed.

“Madonna Blyth, Karri McMahon and Eddie Bone will play in more defensive midfield roles in what we see as a strong combination.”

The Hockeyroos will face Samoa in their opening encounter before taking on New Zealand.

All pool matches will be live streamed by Hockey New Zealand.