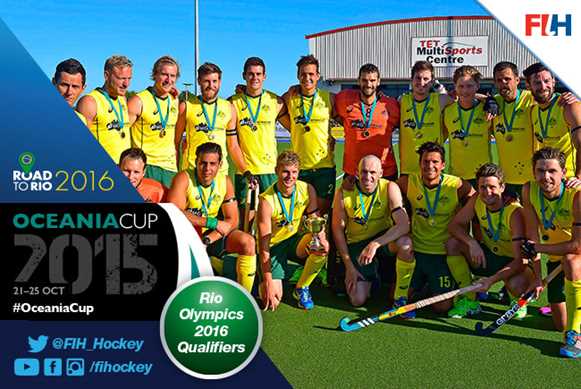 It was double gold for Australia men and women at the 2015 Oceania Cup in Stratford, New Zealand.

In two tightly contested finals, New Zealand's Black Sticks pushed their higher ranked rivals every inch of the way, but the men were unable to recover from an early two-goal burst from the Kookaburras, while the women fell to their Trans-Tasman opponents in a shoot-out.

An early onslaught by Australia dashed New Zealand’s hopes of appearing at the Rio 2016 Olympic Games.

It was an exciting and action-packed game, and New Zealand's Black Sticks fought every inch of the way, but once Australia's Kookaburras have a lead they are highly unlikely to surrender it .

Jamie Dwyer and Glenn Turner were on hand in the fourth and sixth minute to give the world number one side an early lead, and New Zealand Coach Colin Batch and his men were left fighting an uphill battle.

The Black Sticks pulled one back in the 20th minute through James Coughlan, but the two-goal cushion was restored when Trent Mitton scored his eighth of the tournament in the 44th minute.

New Zealand's Kane Russell scored from a penalty corner with seven minutes left on the clock, but even as his team kept pushing forward, they could not find a way through the Kookaburra defence.

The results continues Australia's dominance of this event, having won it on every occasion since 1999.

Australia's win also meant that Ireland qualified for the Rio 2016 Olympics. To read about their qualification, click here.

Following their win, Australia Coach Paul Gaudoin said: “I thought we started really well and stuck to our game plan today putting a lot of pressure on New Zealand. We created many turnovers and opportunities to score, however, towards the end we went off course, which resulted in a tight second half. It’s good to win games where you feel like you have played well, but there’s still plenty of room for improvement for us.”

After the game, New Zealand Captain Simon Child said: “Australia came out really well and put us under pressure early on. We gave it everything and played some of our best hockey.”

In the third/fourth play-off, Fiji scored 11 goals to secure bronze medals and consign Samoa to four defeats in the tournament.

Fiji’s Leevan Dutta scored four goals to finish the tournament as top scorer. His 12 goals put him ahead of Australian duo Jamie Dwyer and Glenn Tuner with 10 and nine goals respectively.

Also finding the score-sheet for his second hat trick of the tournament was Adrian Smith, while Samoa’s Johnny Sega scored a consolation goal when he put a penalty corner past the Fiji defence.