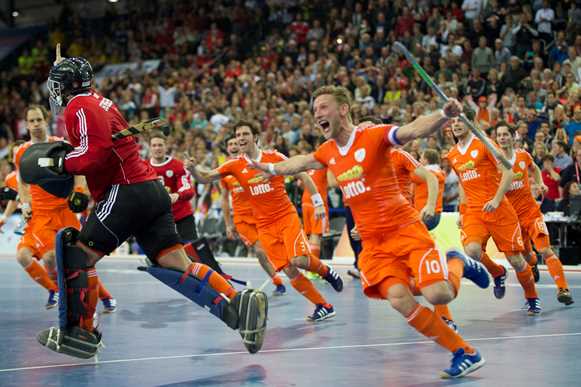 The Netherlands men have recorded one of the biggest shocks in Indoor Hockey World Cup history by defeating triple world champions Germany in the tournament semi-finals in Leipzig. The sensational result means that it is a certainty that a new name will be engraved on the men’s trophy, with Austria also making the title match after beating Iran.

The first semi-final was played in front of a hugely vocal sell-out 5,500 crowd and was an absolute thriller, with the Netherlands producing some truly magical hockey to race into a 4-1 half time lead before Germany battled back, with Alexander Otte levelling the scores with literally seconds of the match take the game to a dramatic shoot-out.

Netherlands goalkeeper Laurens Goedegebuure was the hero of the hour, producing magnificent saves from Moritz Fürste and Fabian Pehlke to give the Dutch an historic victory at Germany’s home of indoor hockey.  “It is unbelievable that we won”, said Dutch shot-stopper Goedegebuure after the game. “When we look back at this next week we will just say ‘wow’”. Netherlands coach Robin Rösch was full of praise for Goedegebuure, commenting: “Big thanks to our goalkeeper because he kept us in the game today, and we knew that Germany could fight back. In the end the win was a bit lucky for us but we deserved it.”

Commenting on his team’s defeat, Germany Head Coach Stefan Kermas said: “We lost the match in the first half, not in the shoot-out. After we came back I thought that we would make it, but we didn’t.”

The Netherlands will play Austria in Sunday’s showpiece final after they defeated surprise team Iran 7-5. The Austrians were in sparkling form to open up a 6-1 lead, but the Iranians – who produced a shock result by defeating Russia in the quarter-finals – scored three times in quick succession to breathe new life into the match. However, Austrian goal-machine Michael Körper put the result beyond doubt with his fourth of the game before Iran’s Behadad Beiranvand completed the scoring.

Speaking after the match, Austria captain Benni Stanzl said: “I’m speechless. I really cannot describe what has happened. It is an historical success for a small federation like the Austrian federation. It hurts that Germany are not in the final because many of my friends are in their team, but we have a good chance to beat the Netherlands in the final.” Regarding defeated opponents Iran, Stanzl said: “It was a sensational performance from them. They fully deserved the chance to play in the semi-final.”

The men’s matches that take place on Sunday at the Indoor World Cup will decide the placings from 1 to 8. The Bronze medal match between host nation Germany and Iran takes places at 1130 (UTC / GMT +1), with the title match between Netherlands and Austria starting at 1430. Sweden and Russia will play for 5th place at 0830, with Switzerland and Poland fighting for 7th at 08.45 on pitch 2.

Sweden confirmed their place in the play-off for fifth place with a 4-3 victory over Switzerland. Karl Hemvik scored a hat-trick for the Swedes, who will go into the 5-6 classification match knowing that they have performed way above expectations. The team came into the tournament as the lowest ranked in the tournament, placed 17th in the FIH Indoor World Rankings, but are now guaranteed at 6th place finish at minimum.

Sweden’s opponents in the 5-6 classification game will be Russia, who overpowered Poland. Goals from Sergey Spichkovskiy (2), Alexander Zhirkov, Dmitry Volkov, Evgeny Mokrousov and Alexander Likov helped Russia to a 6-4 win over the Poles. Poland and Switzerland will play off for 7th place.