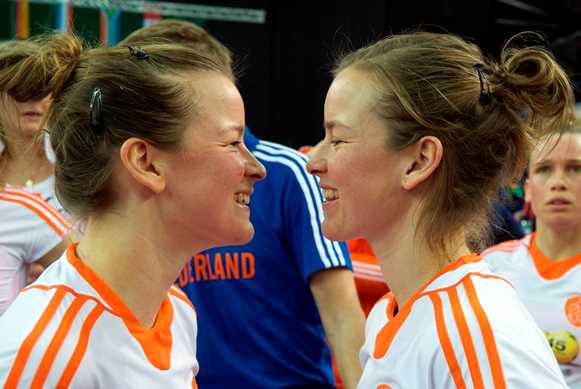 The Indoor Hockey World Cup is something of a get together for several family members who are spread throughout the teams competing here in Leipzig. The Australia men’s team contains three brothers among their ranks – team captain Kurt, Heath and Flynn Ogilve. “To line up alongside my brothers ahead of the first game was amazing”, said Heath. “Listening to the anthem was a special moment, a huge honour.”

Both the Dutch and Czech Republic women’s teams contain sets of twins, with Denise and Daphne Admiraal lining up for the Netherlands and Tereza and Adela Mejzlikova representing the Czechs. “This is something special although we have played in the same team since we were little,” said Denise, the current top scorer in the women’s competition.

Austria has the Lenzinger sisters, Catherine and Alexandra, in their squad. “I’m the one giving some guidance because I’m the older sister,” explained Catherine, who plays in defence while her sister is a forward. “We always share a room, where it is possible”, she continued. While sharing a room is standard for the Lenzinger sisters, the Czech twins Tereza and Adela always find different room-mates within the team.

There are also several pairs of brothers among the men’s teams including Czechs Martin and Tomas Hanus, Canada's Devohn Noronha Teixeira and Micah Teixeira, Switzerland's Dominic and Fabian Wullschleger as well as Joakim and Johan Björkman of Sweden. The Björkmans are not the only brothers among the Swedish team, with Axel and Erik Ströby also in the group.

This Indoor World Cup doesn’t only see siblings contained within a single team. For example, Katharina Otte and Franzisca Hauke are both representing Germany’s women, while their respective brothers Alexander and Tobi, the FIH Player of the Year 2013, are part of the Germany men’s squad.

“We talk a lot during the tournament”, explained Franzisca Hauke.  “I’m always asking for his feedback on my performance and I ask him how I can improve. Our parents are also here, so it’s nice for them too.”

Tobi added: “It’s cool, but sometimes it’s not so nice as I cannot always see her games due to the schedule and our own preparations. I think the women’s tournament is tough but I really hope that she makes it through to the final.”

Although the schedule is tight, Franzisca – known to her team-mares as “Sissy” – makes a big effort to see Tobi during the event. “I try to meet Tobi as often as I can. Sometimes I even message him in the evening and ask if we can still meet in the hotel. When he is already in bed, I don’t hesitate to see him in his room.”

For Alex and Katha Otte it works the other way around because Katha has by far more international experience. “I think it’s quite interesting that the younger sister has much more international experience than I do,” said Alex. “During the day it doesn’t matter that Katha plays in the women’s team because this fact doesn’t influence my preparation. However, it’s good for the family who will come to visit.”

Czech’s Republic’s Martin Capouch also seeks advice from his big sister Renata. “She is older, so she is the boss. I’m always interested in her feedback.” Renata sees this differently. “Usually my brother texts me when has forgotten something,” she said, laughing.

Their team-mates Klara and Jakub Kyndl are also in touch during the competition. “We have a family group on Whatsapp where we wish each other good luck,” said Jakub. Klara agreed: “This is a nice feeling. We support each other and of course I’m also asking him for feedback. We stay in the same hotel, so we try to catch up as often as possible.”

The Indoor World Cup truly is a family affair.