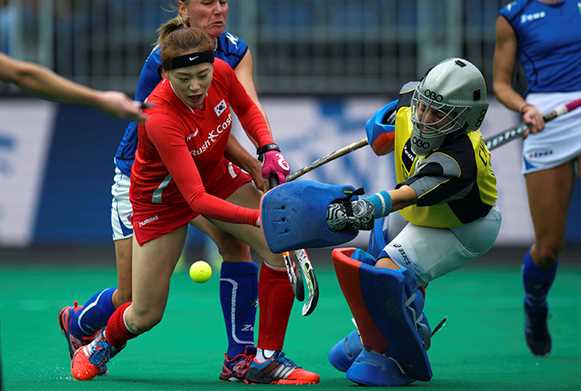 Day 1 of the women’s competition at the FINTRO Hockey World League Semi-Finals proved to be a good one for the Netherlands, New Zealand and host nation Belgium, who were all winners as the mammoth Olympic qualification event got underway in Antwerp. It was also a fine day for Italy, who claimed a superb draw against Korea. More details about the day’s games can be found below.

Korea 1-1 Italy
A last gasp equaliser from Giuliana Ruggieri gave Italy a point against higher ranked Korea as the two Pool A opponents started their competition with a 1-1 draw. Italy, 16th in the FIH World Rankings and winners of the Hockey World League Round 2 event in Montevideo, gave an excellent account of themselves against the world number 9, fighting back from Park Mihyun’s early goal and deservingly claiming a leveller thanks to Ruggieri’s perfectly executed penalty corner deflection penalty corner two minutes from the end.

“It was a great result for us because Korea are a really tough side, so it was a good beginning for us”, said a joyous Maria Garraffo reflecting on Italy’s fine performance. “It was such a good feeling to score late and we also created a lot of chances, which gives us a lot of confidence for the matches ahead.”

Netherlands 11-0 France
World number 1 side the Netherlands cruised to a comfortable win over France in the second Pool A match of the day to make a clear statement of their intent to defend their Hockey World League title and secure a place at the Rio 2016 Olympic Games. France - who accepted a late invitation to compete in the event in place of Azerbaijan - put up a valiant effort but found life tough going against the reigning World and Olympic champions, with Lidewij Welten and Maartje Paumen both netting hat-tricks.

“It was a good game for us and we played at a quick tempo”, said Caia van Maasakker, another Netherlands scorer, after the game. “It was hard for France to come here so late, but I think that they did their best. We have trained hard for this tournament, so hopefully we can get a top three finish.”

New Zealand 12-0 Poland
New Zealand got their Pool B campaign off to a flying start with a 12-0 win over Poland in what was the first match of the entire event. Gemma Flynn netted four times in the rout, with team captain Anita Punt and Olivia Merry both netting doubles. Punt’s second goal was the unquestionably the best of the game, smashing a thunderous volley into the roof of the Polish net from the top of the circle.

New Zealand’s Brooke Neal was rightfully pleased with her team’s performance on the opening day, stating: “It was an excellent team effort from the girls, we stuck to our structure really well today. We had a really good build-up coming into this event and we are really pleased with our fitness levels as we have been working hard on that in order to compete at the top level.”

Belgium 1-0 India
Host nation Belgium secured a 1-0 win over India in their opening match of the competition, with Liselotte van Lindt’s second half penalty corner effort giving the Red Panthers all three points against the Eves. Van Lindt fired home a penalty corner follow-up five minutes after half time, although arguably the game’s most crucial moment arrived a minute later when Belgian defender Stephanie de Groof showed incredible reflexes to deny a certain goal with a stunning clearance off the goal-line.

“I think in the first half we played with too much stress, we were feeling the pressure to perform in front of the home crowd”, said De Groof, a member of the home club KHC Dragons. “We dominated in the in the second half, and we knew that we didn’t need to win the match by lots of goals - it was just about making sure we won.”

Referring to her stunning goal-line clearance, she said: “I don’t know if I could do it again! It was just a reaction, but I know it was a big moment for us.”

More information about the competition including video clips, imagery and official tournament information can be found by clicking here.