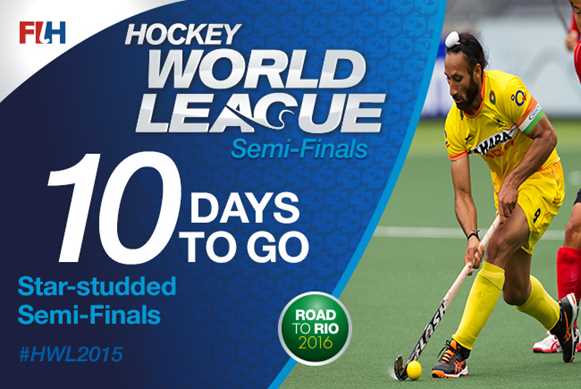 With the Hockey World League Semi-Finals in Antwerp just three weeks away, we look at some of the exciting action you can expect over the 10 day competition.

And the great news from Antwerp is that this is the event that sees the launch of the partnership between Star Sports and FIH, so hockey fans everywhere will be able to take advantage of the advanced technology that Star Sports will be bringing to its coverage of all the hockey action in Antwerp.

Antwerp is hosting both the Men’s and the Women’s Semi-Finals, and there will be an exciting mix of familiar faces and new stars emerging in the sport. The two-year Hockey World League cycle has offered some of the lower-ranked nations a tremendous opportunity to play at the highest level, and you can rest assured that these teams will have done their utmost to be competitive and take this chance for glory.

Beginning with a look at the Men’s event, Australia would have to start as favourites for the top spot, but with India riding the crest of a wave of success under new coach Paul van Ass, and Pakistan seeking to regain their place at the top table of hockey, nothing is a certainty.

Great Britain has made good progress in recent months, and Great Britain coach Bobby Crutchley was in determined mood when assessing his team’s chances against the world’s number one team: “Until 2010 an England or GB team hadn’t beaten Australia for 22 years. Last year we beat them twice (at the World League Final and Champions Trophy), however, they are still the best team around and were outstanding at the World Cup. We know we have to be at the top of our game but yes we feel we can beat them.”

Likewise Belgium, whose form has not yet been rewarded with major medals. The Red Lions are hungry for success and will be viewing qualification for the World League Final and the Olympics as the minimum achievement in front of a home crowd.

Talking about the competition format, Crutchley believes any team could enjoy their moment in the sun, but he backs Great Britain’s near neighbours to upset the form book. “The tournament is a great opportunity for the lower ranked teams to qualify for Rio. The quarter final format means that a good performance on a single day can be enough. All the teams could be a threat and I think Ireland, in particular, have shown they have the potential to play above their current World Ranking.”

Belgium, Great Britain and Ireland all compete in Pool B and, with China and Malaysia making up the rest of that group, this is a Pool that is wide open.

In Pool A , the world rankings would suggest a battle for the top places between Australia, India and Pakistan, but with so much resting on the quarter-final match, both Poland and France can be expected to play with the derring-do that could spring a surprise result.