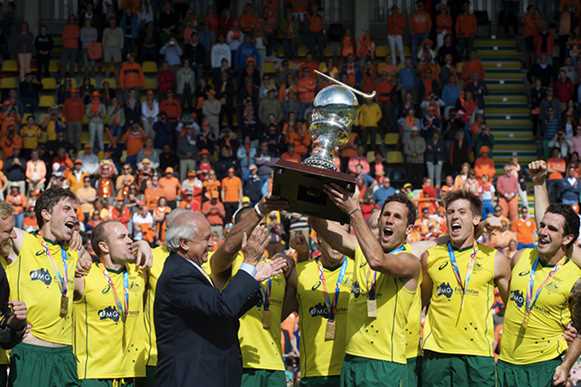 HWL2015 Antwerp: Will the Mighty Kookaburras dominate men’s Pool A?

With the spectacular FINTRO Hockey World League Semi-Finals in Antwerp set to get underway this weekend, FIH provides you with a look at the teams that will be competing in these crucial qualification competitions for the HWL Finals and Rio 2016 Olympic Games. Today, our focus is on Pool A of the men’s competition, where Australia, India, Pakistan, Poland and France will fight it out ahead of for a place in the quarter-finals.

AUSTRALIA - current world ranking: 1
Kookaburras coach Graham Reid has named an experienced squad as his team attempts to land the double ticket of the HWL Final and also achieve qualification for the 2016 Olympic Games, admitting, “We’re approaching the World League Semi-Final like we would an Olympics”. Of the 18-man squad, 14 were members of the team that won the Rabobank Hockey World Cup just a year ago while 13 were part of the team that grabbed Commonwealth Games Gold last August. The exception is the inclusion of 18-year-old striker Blake Govers, the brother of Olympic Bronze medallist Kieran, who is selected following a series of impressive performances. Five times FIH Player of the Year Jamie Dwyer will feature in Antwerp having recently become Australia’s most capped player in history, overtaking Jay Stacy’s record of 321 appearances at the Sultan Azlan Shah Cup in Malaysia where the 36-year-old scored eight times as the Kookaburras finished in second place behind Oceania rivals New Zealand. Both Dwyer and ace defender Mark Knowles - Dwyer’s brother-in-law and FIH Player of the Year for 2014 - were absent from the Hero Hockey Champions Trophy at the end of last year.

INDIA - current world ranking: 9
Eight times Olympic champions India have in recent years been showing signs that a return to the glory days of old might be just around the corner. Following a 9th place finish at last year’s Rabobank Hockey World Cup, the team produced a string of high quality performances to claim the Silver medal behind World champions Australia at the 2014 Commonwealth Games in Glasgow, Scotland. That success was a sign of even greater things to come, with India storming to glory at the 2014 Asian Games and sealing their place at the Rio 2016 Olympic Games by defeating great rivals Pakistan in the competition final before landing a fourth place finish at the end of year Hero Hockey Champions Trophy event on home soil in Bhubaneswar. The team selected by new Head Coach Paul van Ass – who guided the Netherlands men to Silver medals at the 2012 Olympic Games and 2014 Rabobank Hockey World Cup respectively – contains masses of experience, with 28-year-old midfield icon Sardar Singh being named the captain of the side. Brilliant goalkeeper P.R. Sreejesh, giant drag-flicking defender V.R. Raghunath and lively attackers S.V. Sunil, Yuvraj Walmiki and Akashdeep Singh have all been confirmed in the squad. Despite the fact that they have already achieved Olympic qualification and are pre-qualified for the end-of-year showpiece Hockey World League Final as hosts, India will be determined to make a massive impression on this competition by finishing as high in the standings as possible.

PAKISTAN - current world ranking: 10
The ever-dangerous and unpredictable Pakistan are likely to be a serious threat to all of the teams taking part in Antwerp, especially after their surprise Silver medal at the Hero Hockey Champions Trophy tournament in Bhubaneswar at the end of 2014. Pakistan’s famous Greenshirts went into that tournament on the back of a terrible run of results, failing for the first time in their history to qualify for the 2014 World Cup and also being denied an automatic Olympic qualification by India in the final of the 2014 Asian Games. Despite finishing bottom of their Pool in Bhubaneswar, Pakistan burst into life in the knock-out stages of the Champions Trophy, defeating the Netherlands (quarter-finals) and India (semi-finals) before losing the tournament final against Germany. The squad named for Antwerp contains nine players who have played over 100 times for Pakistan, with Muhammad Imran (230+ caps), Muhammad Waqas (210+), Ahmed Fareed (190+) and Shafqat Rasool (170+) being the most experienced of the group.

POLAND - current world ranking: 17
Poland sealed their ticket to the Hockey World League Semi-Finals thanks to a second place finish at the HWL Round 2 event in Singapore earlier this year. The team recorded wins over Mexico, Japan, Bangladesh, Singapore and Oman to set up a meeting against Malaysia in the tournament final, with the Asian giants coming out coming out comfortable 8-0 winners. However, it would be foolish to read too much into that result, as simply reaching the final had already helped the European nation achieve their target of landing a berth in the Olympic qualifier stage of the tournament. 24-year-old team captain Pawel Bratkowski netted eight penalty corners in that tournament, and will be looking to collect another impressive goal-scoring haul in Antwerp.

FRANCE - current world ranking: 18
Following their excellent tournament victory at the Greenfields Hockey World League Round 2 event in Cape Town (RSA), France are expected to arrive in Antwerp brimming with confidence. The team put together a six match-winning streak at the tournament in South Africa, defeating Azerbaijan, Czech Republic, Belarus, Switzerland, Egypt and China to take the title and reach the Olympic qualifier stage of the Hockey World League. 22-year-old Gaspard Baumgarten was the hero of the final, netting a hat-trick of field goals as France stormed to a 5-2 victory over China. However, Baumgarten was far from being the only star of this talented, youthful group, with midfielder Simon Martin-Brisac and classy shot-stopper Martin Zylbermann being named the Player of the Tournament and Goalkeeper of the Tournament respectively. Many of the current France team were part of the hugely successful side that claimed a second place finish at the Hero Hockey Junior World Cup in 2013, a sure sign that their star is very much on the rise.