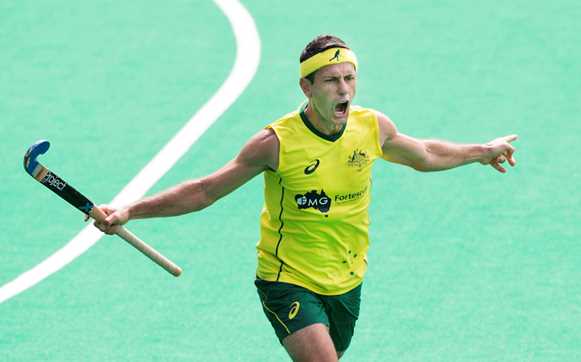 Day 8: Nearly 5000 fans were present at the home of KHC Dragons to witness another pulsating day of action at the FINTRO Hockey World League Semi-Finals, and the line-up for the men’s quarter-finals became known.

A hat-trick for Chris Ciriello helped Australia’s Kookaburras hit India for six and seal first place in Pool A, and will now face Ireland on quarter-final day next Wednesday (1st July). The Irish finished fourth in Pool B after being defeated in dramatic fashion by Belgium, who topped Pool B and will now go head-to-head with Pool A’s fourth ranked team France.

The other two quarter-finals that will take place this coming Wednesday will see Great Britain taking on Pakistan and India doing battle with Malaysia as the race for the Hockey World League Final and Rio 2016 Olympic Games tickets continues in Antwerp.

Pool A
Pakistan 2-2 France
The opening match of the Day 8 saw France battle to a fine draw against Pakistan, but it wasn’t enough for them to either leap-frog their opponents in the Pool A standings or change their quarter-final destiny.

Les Bleues finished fourth in Pool A behind third place finishers Pakistan, and now face the difficult task of beating the team that finishes top of Pool B if they are to reach the semi-finals and maintain hopes of taking one of the three guaranteed tickets to the HWL Final and Rio 2016 Olympics on offer here in Antwerp.

“France played well but we were quite sloppy, but I think that the whole of the game we had too many chanced that we missed”, said Greenshirts captain Mohammad Imran, who saw a first quarter penalty stroke brilliantly saved by France shot-stopper Martin Zylbermann. We will learn from our mistakes and plan for the quarter-final.”

India 2-6 Australia
Chris Ciriello scored a hat-trick of penalty corners as Australia sealed a first place finish in Pool A thanks to victory over India.

Legendary attacker Jamie Dwyer (pictured) rolled back the years with a candidate for goal of the day, with the 36-year-old five times FIH Player of the Year starting and finishing brilliant attack with a blistering backhand volley into the roof of P.R. Sreejesh’s goal.

Hat-trick hero Chris Ciriello said: “We spend 25 hours a week training and a lot of that time is spent flicking and doing set piece practice, and today I was lucky enough for a few of them to come off. We had quite a lot of opportunities so it was good to take some today, there is still a lot that we can improve on though.”

Pool B
Malaysia 1-3 Great Britain
Goals from David Condon, Ashley Jackson and Sam Ward helped Great Britain overcome a stubbornly resistant Malaysia to give themselves a minimum second place finish in Pool B.

The result helped GB move ahead of Malaysia in the Pool B standings, although the final position of both teams will not be known until the completion of the Belgium versus Ireland match later today.

Looking ahead to the next phase, Great Britain’s Alastair Brogdon said: “We’ll go into the quarter-finals feeling confident as we are unbeaten with two draws and two wins, and I think our performances are getting better which is something we’ll definitely take into the quarters.”

Belgium 2-1 Ireland
Team captain John-John Dohmen scored a crucial winner 25 seconds from time to give Belgium a 2-1 win against Ireland, securing a first place finish in Pool B and finalising the line-up for the competition quarter-finals in the process.

Dohmen raced clear and scored into an empty net after Ireland had removed exceptional goalkeeper Davey Harte in a last-gasp bid to claim all three points, giving Belgium’s Red Lions a hard-earned victory in front of 5000 cheering fans.

The dramatic finish to Pool B firmed up the line-up for the quarter-finals, with Belgium set to face France, who finished fourth in Pool A. For Ireland, a fourth place finish in Pool B means that they will now face Pool A winners Australia, the top ranked team in world hockey.