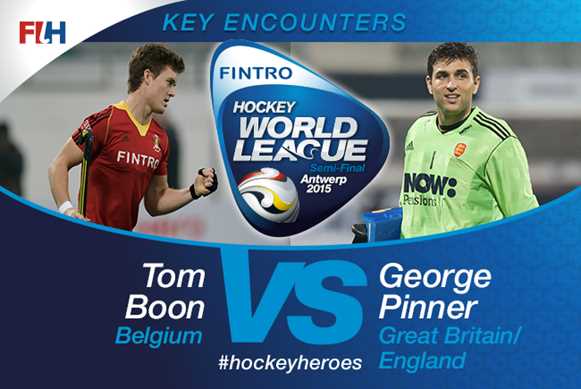 In the first of our Hockey World League Semi-Final (HWL SF) countdown clashes, we feature one of the world’s top goalkeepers and one of the best strikers currently gracing the international hockey stage – George Pinner versus Tom Boon, who will be going head to head in the forthcoming HWL SF in Antwerp.

The two players have been going head-to-head for the past three years, as the players’ respective teams, have been either 4th or 5th in the FIH World rankings since the end of 2013, and each encounter between the two nations tends to be a match of intrigue.

The most recent encounters between Pinner and Boon have seen Pinner’s England take the upper hand, but only marginally. England emerged 3-2 winners in the 7th/8th place play-offs in the 2014 Hero Hockey Champions Trophy in Bhubaneswar and, earlier in the same competition, honours were even as the teams drew 1-1 in the pool matches.

At the Hockey World Cup in June 2014, England faced Belgium in the final pool match with both teams needing a win to progress to the quarter-finals. England again squeaked through as 3-2 winners.

At the four nations invitational tournament held in Glasgow in the run-up to the World Cup, Belgium were 2-1 winners, but at the Hero Hockey World League Finals in New Delhi, it was again England who won by a 1-0 margin.

Despite the upper hand held by England when it comes to recent results, Belgium has crept ahead in the World Rankings. The Red Lions currently lie in fourth position, England one place behind in fifth.

28-year-old George Pinner’s first major competition as number one goalkeeper for England was the 2012 Champions Trophy in Melbourne. His team met Boon’s men in the 5th-8th play-offs and finished on the wrong side of the 4-0 scoreline.

At the 2013 Tri-Finance Eurohockey Championships, England faced Belgium in the semi-finals, and again were on the losing side, this time to a 3-0 defeat. Since then however, England has not lost to Belgium, and despite being among the top goal scorers at every major tournament since 2012, Tom Boon has not scored against England since George Pinner took up residence between the posts.

Not all goalkeepers have fared so well against the prolific Belgian. He made his debut for the Belgium national side in 2008, and at the London 2012 Olympics he scored five goals, with Belgium finishing in fifth place. His first encounter against Pinner was at the Champions Trophy later that year. He scored three goals at this event, two against the Netherlands and one against Germany to help his team secure a fifth place finish.

It was in the 2013 HWL SF that Boon really made his mark; five goals, including two in the semi-final match against New Zealand and one in the final, which the Red Lions won, against Australia. Since then, the 25-year-old has regularly been rattling in numerous goals at major competitions, including a glorious four-goal spree against Malaysia in the 2014 Hockey World Cup.

Talking about his opponent, George Pinner says: “Everyone is fully aware of Tom's ability, he has proven himself a danger in the circle and from penalty corners for a few years now and I'm sure it will be no different again in the World League. I do have a good record against him, although you are only ever as good as your next game.”