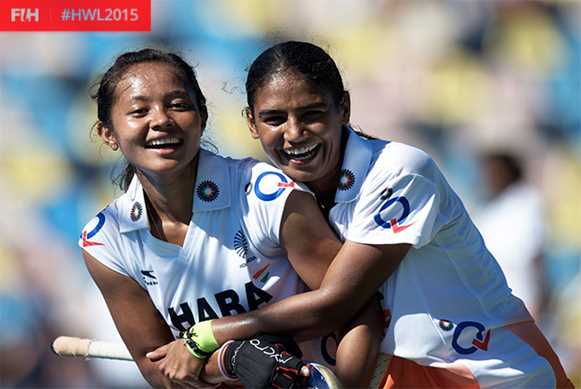 Eight international women’s teams have the chance to progress along the Road to Rio this weekend when the second of three Hockey World League Round 2 events gets underway at the Major Dhyan Chand National Stadium in New Delhi, India.

The tournament, which takes place between Saturday 7th and Sunday 15th of March, will see Malaysia, Russia, Poland, Ghana, Kazakhstan, Singapore, Thailand and host nation India all fighting for a top two finish in order to guarantee a place in the HWL Semi-Finals, where the coveted berths at the 2016 Olympic Games in Rio de Janeiro are on offer.

Like all of the Round 2 events, the competition in New Delhi will witness a clash between teams that came through the first phase of the competition against sides that were automatically given a bye through to Round 2 due to their higher placement in the FIH World Rankings. The highest ranked teams will enter the tournament in the Semi-Finals.

As the top ranked team and also having that all important advantage of playing on home soil, it is little surprise that India (FIH World Ranking: 13) come into the Round 2 event as clear favourites. Despite an average of just 22.7 years, the squad contains five players who have each surpassed the 100 international appearances marker, with team captain Ritu Rani being the squad’s most experienced athlete with 193 caps. Another Rani well worth watching out for is 20-year-old super-striker Rani Rampal, who wears shirt number 28 and was named player of the tournament at the 2013 Junior World Cup as her team claimed the Bronze medal.

India’s Eves compete in Pool A against three teams that took part in Round 1: Poland (WR: 26), Ghana (WR: 30) and Thailand (WR: 45). The Indian girls begin their HWL campaign against Ghana this Saturday.

“We are excited about playing Ghana in the opening match as it will be the first time that we will have played against them”, said India captain Ritu Rani, 23. “Our sole target is to perform well and get into Round 3 in order to move a step closer to qualifying for the 2016 Rio Olympics. The team is confident following recent victories against Germany and Spain in Valencia, which has certainly motivated us to put on a great show in the League.”

Like Pool A, Pool B also contains three teams that battled through Round 1 to maintain their dreams of reaching Rio. Malaysia (WR: 21) were winners of the Round 1 event in Singapore, where the finished ahead of Pool B rivals Kazakhstan (WR: 32) and Singapore (WR: 43) as well as Pool A competitors Thailand. Malaysia are the top ranked team in the Pool and will be targeting top spot, although third-ranked Russia (WR: 23) arrive in New Delhi with a squad that is more than capable of making a big impression.

In the women’s Hockey World League, a total of seven qualification places for the HWL Semi-Finals are available from the Round 2 events in Montevideo (URU), New Delhi (IND) and Dublin (IRL).  The reason for seven rather nine qualifiers is because both Spain and Belgium, two nations ranked between 12-19 at the time of seeking entries, are hosting Semi-Final tournaments later this year and have therefore already qualified.

The top two finishers from Montevideo, New Delhi and Dublin are certain to qualify for the Semi-Finals, being joined by the highest ranked of the third placed finishers from those three events.  Italy and Uruguay recently confirmed their places in the Semi-Finals with a top two finish at the event in Montevideo, while Azerbaijan face a nervous wait until the end of the Round 2 events before knowing if they are the highest ranked of the third placed finishers. To learn more about how the teams progress through the competition in the hope of reaching the Rio 2016 Olympic Games, click here.

You can keep track of the tournament in New Delhi on the official tournament microsite.