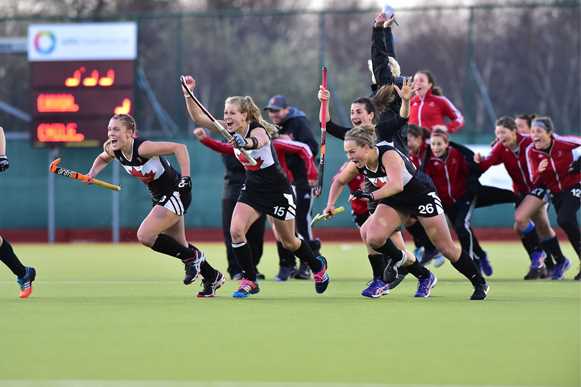 Ireland and Canada overcame the respective semi-final challenges from Belarus and Chile to seal a place in the final of the UDG Healthcare PLC Hockey World League Round 2 event, taking a huge leap forward on the Road to Rio in the process.

Nicola Evans scored twice to help Ireland (FIH World Ranking: 14) to a comfortable 7-0 win over Belarus (WR: 18), a result which put the host nation into the Dublin final and sealed a ticket to the Olympic qualifier phase of the HWL. The Green Army were in irresistible form, with Anna O’Flanagan, Megan Frazer, Naomi Carroll, Emma Smyth and Kathryn Mullan all contributing goals in a thoroughly comprehensive victory for the home favourites.

Canada’s (WR: 22) ticket to the event final and the next phase of the Hockey World League was certainly earned the hard way, winning a fascinating shoot-out against the ever-impressive Chile (WR: 20) after regular time finished with the scores locked at 0-0. Nine goals were scored from twelve attempts in the shoot-out, with Canadian shot-stopper Kaitlyn Williams doing enough to deny Chile’s Sofia Filipek in sudden death to spark jubilant celebrations from the north Americans.

All eight teams will be in action on Sunday (22nd March), with the final day’s play getting underway with Ukraine and Turkey going head-to-head in the 7-8 classification match (0930 local time – UTC/GMT) before Lithuania and Austria take to the field in the battle for 5th place (1200).

Belarus and Chile (1430) will contest the 3-4 classification match, with Belarus knowing that they need the win in order to claim the final ticket to Olympic qualifier stage of the Hockey World League as the highest ranked third place finisher from the Round 2 tournaments.

The showpiece final between Ireland and Canada (1700) is certain to draw a big crowd, and one very special guest will be quietly hoping to see a victory for the Green Army. Michael D Higgins, the President of Ireland, will be amongst the crowd and enjoying the fantastic atmosphere in the National Hockey Stadium at University College Dublin.

In the women’s Hockey World League, a total of seven qualification places for the HWL Semi-Finals are available from the Round 2 events in Montevideo (URU), New Delhi (IND) and Dublin (IRL).  The reason for seven rather nine qualifiers is because both Spain and Belgium, two nations ranked between 12-19 at the time of seeking entries, are hosting Semi-Final tournaments later this year and have therefore already qualified.

The top two finishers from Montevideo, New Delhi and Dublin are certain to qualify for the Semi-Finals, being joined by the highest ranked of the third placed finishers from those three events.  Italy and Uruguay confirmed their places in the Semi-Finals with a top two finish at the event in Montevideo, being joined in Round 3 by New Delhi finalists India and Poland and Dublin finalists Ireland and Canada.

Azerbaijan are currently the highest ranked of the third place finishers, although they will need to wait for the completion of the HWL Round 2 event in Dublin before knowing if they have made the cut.