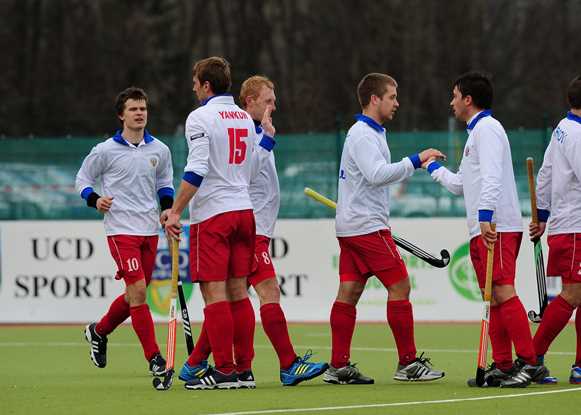 Perfect performance from Russia leads to victory in Croatia

Russia and Switzerland qualify for Hockey World League Round Two

Maximum points from four games was enough to secure Russia an emphatic victory in the Hockey World League Round One and to cement their bid to re-emerge as a potential contender at the top table of field hockey after a 24-year absence from the major international competitions.

Russia – who are currently ranked 19th in the FIH World Rankings, while all their opponents in this competition are ranked outside the top 35 – ended the Hockey World League Round One competition, held in Sveti Ivan Zelina, Croatia, with a perfect four wins from four games, brushing all opposition aside as they netted 38 goals and conceded no goals.

The Russian team, led by captain Evgeny Mokrousov, racked up an 11-0 victory over Bulgaria, a 7-0 victory over their closest rivals, Switzerland and a 10-0 win against Turkey before completing the Russian rout with a 10-0 win against the home side, Croatia. Top scorer for the all-conquering Russians was Dmitry Azarov, who netted a total 12 times, he was followed by countrymen Nikolay Yankun (6) and Alexander Palyanitsa (5).

Switzerland were the best of the rest, they won two of their four games, drew one and lost one, while Bulgaria and Croatia came third and fourth respectively, with Turkey – who registered no wins in the competition, bringing up the rear.

Russia will now progress through to the Hockey World League Round Two competition, being held in the autumn. This victory signals the start of a Russian revival: they last participated in a major hockey competition in 1990, in the Hockey World Cup. Four years previously at the World Cup in London 1986, they had finished a creditable fourth, but then suffered a slide down the World Rankings.