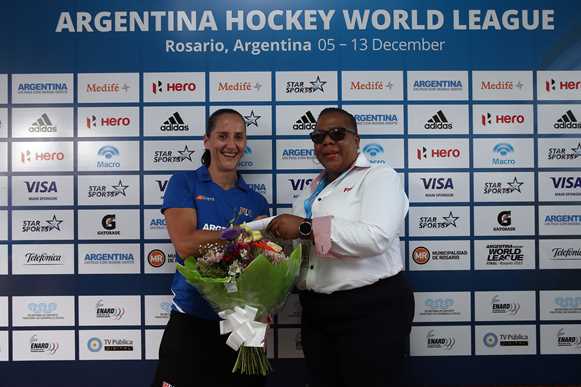 Michelle Joubert today became only the second South African women umpire to receive her golden whistle as she umpired her 100th international match – the second pool match of the Argentina Hockey World League Final in Rosario.

And her friend and mentor, Marelize de Klerk – the first South African to reach the milestone – said: "When I first saw Michelle umpire, I said to her 'one day you will be the number one, you will umpire at Olympic Games and the World Cup. I am so proud that she has fulfilled that potential."

"Since I started umpiring, the game has developed and got more professional," said Michelle. "The players, the coaches, they are all training and playing full-time, so for us, we are really punching above our weight. We work, we have careers, but we also keep up with our fitness and developments in the game."

Michelle is delighted with the direction that hockey is taking, particularly the involvement of more, younger players, but she feels that by making umpires professional, the game could make even bigger strides forward. That said, Michelle was glowing with pride as she received her golden whistle from Executive Board member and FIH representative Maureen Craig-Rousseau.

"To be involved in such a spectacle is just a great opportunity and something I am very proud to be part of." The South African umpire first blew the whistle competitively when she was 22, and was immediately spotted as a person with a natural understanding of the demands of being a top class umpire.

Speaking earlier in the year, she said: "One of the many things I have learnt is that pressure will always be a part of sport… the only difference is how you deal with the pressure.

"With the fast pace of the game, rules changing to make the game even faster and more spectator friendly, the demand on us is even higher to keep up with the game. Apart from the fitness levels, we also need to practice at the top level to help us improve and cope with various aspects of the game and gain experience.

"Over the years I have learnt to love umpiring, I have learnt to cope with the pressures relating to umpiring. I really love being out on the field, I am always excited to be part of the game at such a high level and I always strive to be better than my last performance. I believe we never stop learning, we never stop growing and the same as players and teams share in victory and learn to overcome disappointment, we as umpires have learnt to do the same."