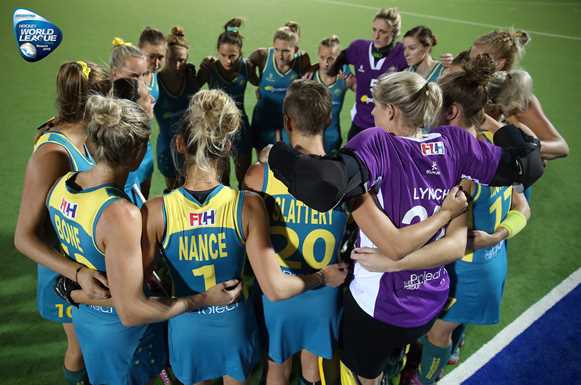 The Netherlands and Australia both won their second pool games, albeit in very different style. Where the Netherlands hit the ground running and dominated their game against New Zealand, Australia were made to battle to the last blow of the whistle for their victory against Argentina.

It was all square in the other two games in this edition of the Argentina HWL Final. Germany and Korea played expansive and evenly-matched hockey but neither side could force the winning goal, while Great Britain dominated much of their game against China but were thwarted as they searched for a winner.

The Netherlands put four goals past a hard-working New Zealand to move top of Pool A after two games. The world number one side set out their ambitions early as Caia van Maasakker scored with just three minutes on the clock. Her goal was an eye-wateringly quick drag flick that 'keeper Sally Rutherford had no chance of stopping.

Petrea Webster made it all square when she connected with a bobbling rebound off Joyce Sombroek's pads, and for much of the remainder of the half, the game was poised in the balance. However, a goal one minute before the half-time whistle from Kelly Jonker was a dampner to the New Zealand spirit.

The match was 40 minutes old when Lidewij Welten showed a piece of brilliance to link with Ellen Hoog and the FIH Player of the Year coolly dispatched the ball high into the back of the net.

Laurien Leurink made it 4-1 after van Geffen had edged her play around the circle before slipping the ball to Leurink, who knocked it past Rutherford's outstretched legs.

Earlier in the day, Franzisca Hauke celebrated 100 caps for Germany, she also scored the opening goal in Germany's Pool A match against Korea.

The match between the world number eight team, Korea, and world number nine, Germany, was always going to be a tough match for both teams. Germany have a wealth of talent when it comes to goalkeepers and the Korea attack was foiled time and again by Yvonne Frank in the goal.

Hauke's goal, when it came after 37 minutes, was the result of patient build-up play from the team, but the shot by the midfielder was pure individual class – taken early from the top of the circle and flying past Jang Soo Ji in the Korea goal.

The German's joy was short-lived as Han Hye Loung (45'), the Korea captain, was able to move freely through the German defence and slip the ball past Frank to even the scoreline. Cho Hye Jin almost clinched the game when she fizzed a shot over the crossbar and Jang Hee Sun thought she and nicked a win for her team when she found the back of the net with just three minutes left on the clock, but the goal was judged dangerous and the game ended with honours even.

The first Pool B match of the day was between fifth ranked China and world number six Great Britain. This was a replay of the HWL Semi-Final in Valencia, where Great Britain won 2-0. On this occasion, China shut up shop and Great Britain were hard pressed to create scoring opportunities.

Helen Richardson-Walsh scored the opener, and just a minute later Wang Mengyu equalised. On a day that she celebrated winning 250 caps for Great Britain, Alex Danson was at the heart of a goal mouth scramble that would have sealed the victory but the forward was devastated when she deflected a goal-bound shot out of the China goal.

"It was one of those days when nothing went our way," said coach Danny Kerry. "China defended deep and it needed an element of luck, which just didn't happen today."

Captain Cui Qiuxia said she was very pleased with her team's work rate and defence, although she felt there were still areas of improvement to be made within the overall performance."

The host nation hit the ground running as Delfina Merino, celebrating 200 caps for her country, scored a magnificent goal four minutes into the game.

It took Australia another 33 minutes to get on the scoresheet, and it was the reliable Jodie Kenny penalty corner that forced the equaliser. Kenny struck the ball sweetly past Belen Succi.

The game went from end-to-end with breath-taking speed and an enormous display of skill from both teams, but it was Georgina Morgan who scored her second goal of the competition to give her team the win, with no time left on the clock.