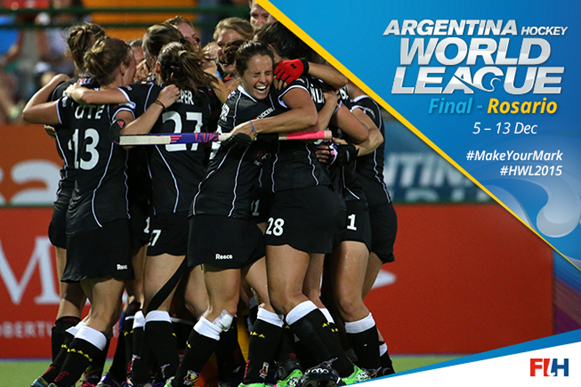 Day of surprises sets up semi-finals in Rosario

It was a day of surprises in the Argentina Hockey World League Final as the teams entered the all-important quarter-final stages.

The biggest upsets of the day happened when first Germany fought back from a 2-0 deficit to beat Australia and then Argentina provided the home fans with the perfect end to the day as they out-witted the world number one side, Netherlands.

In the opening quarter-final, an energetic match between fifth-ranked China and eighth-ranked Korea, saw the China team emerge as 3-1 winners. This was an even game from start to finish, but where Korea dominated play in the middle of the field, China were the more clinical in defence and attack.

China's goals were scored by Wang Mengyu, Xhang Xiaoxue and Yu Qian – who put the ball in the back of the net with just 30 seconds left in the match. Korea had opened the scoring through Cheon Eun Bi.

New Zealand outplayed Great Britain in the second quarter-final. The Black Sticks took 22 minutes to score their opener, through captain Anita Punt, but it was a game that the New Zealand team dominated. Great Britain came back through a penalty stoke scored by Helen Richardson-Walsh, but then Olivia Merry scored from the tightest of angles to make it 2-1.

The third quarter-final looked to be going all Australia's way as they led 2-0 with 16 minutes to go. Two goals from Lisa Altenburg sent the match to shoot-out and heroics from Kristina Reynolds in the German goal meant that the German team won the shoot-out 3-1 and progressed to the semi-finals at the expense of their higher ranked rivals.

The day of upsets was completed when Argentina scored an early goal against the Netherlands and then defended the lead for the remainder of the game. Delfina Merino was the hero as she took the ball wide in the Dutch circle and then hit a ferocious shot past Joyce Sombroek in the Netherlands goal.

The Netherlands threw everything into the match as they tried to breakdown the Argentine defence, but as Argentina captain Carla Rebecchi said: "Today we went to the game with the right attitude. We knew we had to defend and we went into the game knowing that of we got our defence right, we could win."

Meanwhile, Netherlands Naomi van As said: "We have to learn from this. We do not experience this very often, so it is important that we learn. Right now it is a horrible feeling, but tomorrow we will look at what happened and make changes so it doesn't happen again."