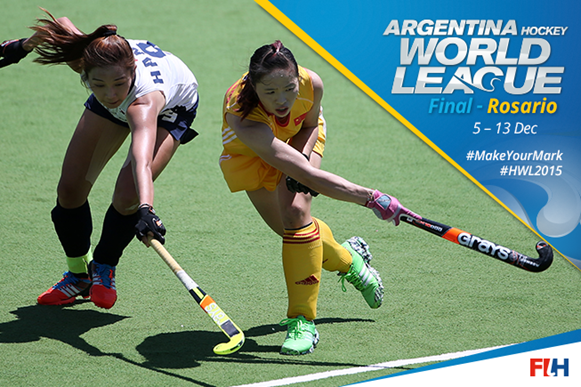 Forget the defensive play around the back for which these two teams are renowned, this Argentina HWL quarterfinal began as a full-blooded attacking encounter between two Asian teams who have impressed throughout this competition. The first quarter-final between fifth-ranked China and eighth-ranked Korea was an epic match of strong defensive performances and fast-paced attacking moves. While China emerged 3-1 winners, Korea also showed their great potential.

What the game lacked in goal finishing, it made up for in energy and work rate. The eventual scoreline means China will play either Netherlands or Argentina in the semi-finals.

Korea opened the scoring when Cheon Eun Bi (5') doubled dragged the ball to outwit Li Dongxiao in the China goal.

China fought back through a series of speedy attacking moves and were rewarded for their efforts when Wang Mengyu (9') flicked the ball high over the head of Korean 'keeper Jang Soo Ji from a penalty corner. Korea had one more scoring opportunity before the end of the quarter, when Kim Da Rae picked up a ball behind the China defence but was unable to finish with a clean shot.

The second quarter continued at the same pace. Korea were particularly effective when attacking down the sides of the pitch, little deflections and surging runs from Kim Hyun Ji and Oh Sun Soon created space and Park Mi Hyun was unlucky not to capitalise on two successive occasions. Li Donxiao saved the first attempt and the ball flew wide on the second.

For their part, China were taking the more direct route, playing the ball fast down the pitch trying to hit their forwards early and catch Korea on the break. Both teams came out for the second half looking to change the pattern of the game and gain an advantage.

Korea pressed high up the pitch, while China appeared resigned to defending deep and relying on the break. Korea captain Han Hye Lyoung nearly broke through when she was played into space by a nifty little pass from Lee Young Sil. Li Dongxiao smothered the shot and it was cleared. The action switched to the other end as China pushed up the pitch. The ever-dangerous Yu Qian took a snappy shot just in front of goal but it was saved by Jang Soo Ji.

The second China goal was scored by Zhang Xiaoxue (45') a scrambled goal after Peng Yang battled her way through the Korea defence.

In the final quarter Korea threw everything at the China defence but the toll of their competitive match against Germany the previous day could have accounted for the lack of clinical finishing by the Korea attack. Certainly, despite the best efforts of Hong Yoo Jin and Cheon Eun Bi, there was no way past the Chinese defensive press. China broke clear of the Korea attack and just a fine double save by Jang kept the Korean hopes alive. With five minutes to go, Korea removed their 'keeper and went to 11 field players. They continued to flow forwards but China nicked possession and Yu Qian was able to score into an empty net with 30 seconds remaining.