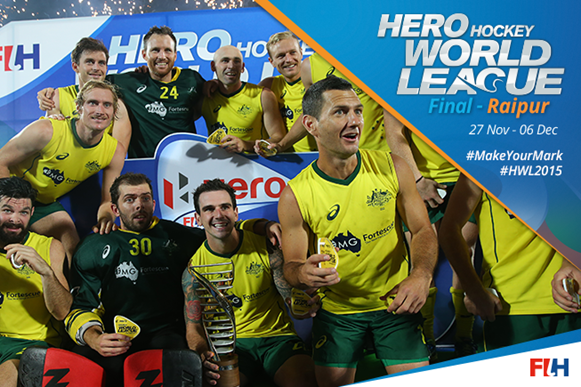 Australia are the men's Hero Hockey World League 2015 champions thanks to 2-1 win against Belgium in the tournament final in Raipur, India.

Penalty corner efforts from Jeremy Hayward and Matthew Dawson were enough for Australia's Kookaburras to take the title, with Simon Gougnard snatching a late consolation goal for Belgium's Red Lions.

The top-ranked Australians dominated the early stages of the gold medal match and were rewarded when Hero Man of the Match Hayward sent a penalty corner effort into the roof of the Belgian goal one minute into the second quarter. Dawson doubled the advantage soon after half-time with another penalty corner, and it would have been 3-0 were it not for a goal-line clearance from Emmanuel Stockbroekx towards the end of the third quarter.

Belgium rallied in the latter stages of the game but were met by stern resistance from the Australian backline. Gougnard forced home a penalty corner in the final minute of the game, although it was not enough to stop the world champions from adding the Hero Hockey World League title to their ever-growing trophy cabinet.

"I am very happy with the teams performance as we showed in the last three games against Germany, Netherlands and Belgium that we can win big matches”, said Australia legend Dwyer after the game. “For me personally, I was quite happy to perform the way I did against the best teams in the world. It gives me belief that even at 36 that I can still play the game well.”

Earlier in the day, host nation India took the bronze medal with a dramatic shoot-out victory over the Netherlands. A huge crowd witnessed Rupinder Pal Singh score twice in the contest but it was the shoot-out heroics of goalkeeper P.R. Sreejesh that gave Asian champions India victory in what was one of the games of the tournament. In the bronze medal match, European champions the Netherlands were the dominant force in the first two quarters, with Mirco Pruijser opening the scoring before Niek van der Schoot’s backhand effort into the roof of the net doubled the advantage ahead of half-time.

India came out fighting after the break and scored three times without reply to take the lead, with Ramandeep Singh netting twice either side of a Rupinder Pal Singh penalty corner before Mink van der Weerden made the score 3-3 with six minutes remaining. Remarkably, four goals arrived in the final stages, with Rupinder and Akashdeep Singh giving India a 5-3 lead before Van der Weerden completed his hat-trick with a late double to force a shootout.

Sreejesh forced errors from Jeroen Hertzberger, Mirco Pruijser and Valentin Verga, with Birendra Lakra, Sardar Singh and Rupinder – who netted a penalty stroke after Manpreet Singh was fouled in the shoot-out – all scoring to seal a famous victory for the home favourites.

“The way that we have played this tournament - and it didn’t work out every time - we have shown that we are a serious competitor at international top level events and that is fantastic for the team”, said delighted India Head Coach Roelant Oltmans after the match. “At the same time, we still made mistakes that can cost you games, but luckily today it didn’t cost us the game, thanks maybe to these two guys next to me”, referring to goalkeeper Sreejesh and team captain Sardar Singh.

“These two guys played an outstanding game, as well as a few others. After the break we were able to change the game completely. We changed quite a number of things at half-time and the way the team translated that into the second half was outstanding.”

The medal matches brought the curtain down on a high quality week of international hockey that has been enjoyed by big crowds at Raipur’s 3,500 capacity Sardar Vallabh Bhai Patel International Hockey Stadium.

Australia’s Jamie Dwyer was named Hero Best Player of the tournament, while Arthur van Doren of Belgium was given the NMDC Best Junior Player award.