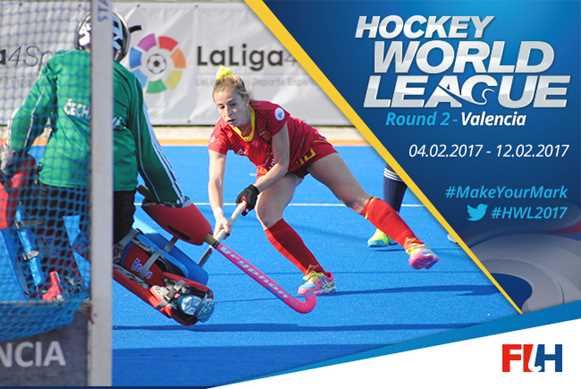 In the opening match, Scotland were made to work hard by a very determined Russia, who just refused to be cowed by the Scottish team's ceaseless running and long periods of possession. It was Scotland’s goalkeeper Nikki Cochrane’s 50th cap for her country and penalty corner goals from Amy Brodie and Robyn Collins made the occasion one to celebrate as the team ranked 17 in the world put paid to Russia’s chances of a place at the HWL Semi-Finals in the summer. Russia did get a consolation goal back, through Irina Osipova, but for Anthony Thornton’s side, it was too little, too late.

Scotland women Head Coach Gordon Shepherd said, “I’m very happy with today’s performance and result. The focus, concentration and application of the players was excellent today. We’re in the semi-finals, which is where we want to be, and the focus on that game will start later today.”

A steady stream of goals from the Redsticks left Ghana with no answers in the second quarter final of the day. The Spanish team opened the scoring with a sweet strike on the run from Carola Salvatella. This was followed just a minute later by a penalty corner from Maria Lopez. This was the first of three penalty corner goals from the Spanish player, who is now second in the scoring table. Also on the scoresheet were Beatriz Perez, Xantal Gine and Carmen Cano. This result means Spain have scored 26 goals in four matches, a statistic that will give their semi-final opponents Scotland, something to think about.

A single goal from Yevhenizya Moroz in the 50th minute was all that separated these two teams. It is a result the Czech Republic will be disappointed by as they entered the quarter finals with high hopes of reaching the semi-finals after a strong second place finish in Pool A. For Ukraine, who at 35 in the world are 10 places lower than Czech Republic, this was a great result. They proved they are made of strong stuff as they held onto their slender lead, despite finishing the match with 10 players after Yana Vorushylo was sent off with a yellow card. The result means Ukraine will now face Poland in the semi-finals.

Poland will be relieved to have made it through to the semi-finals after a spirited performance from Turkey. The match up was between top of Pool B and fourth in Pool A, but the game was much closer than predicted. The team ranked 37th in the world held out against a strong Poland attack until the 47th minute. Magdalena Zagajska broke the deadlock and just a few minutes later, the Polish score was doubled when Natalia Wisniewska scored from a penalty corner. This was not the end of Turkey however, as Perigean Kucukkoc struck the ball sweetly past the outstretched body of Marta Kucharska in the Polish goal.