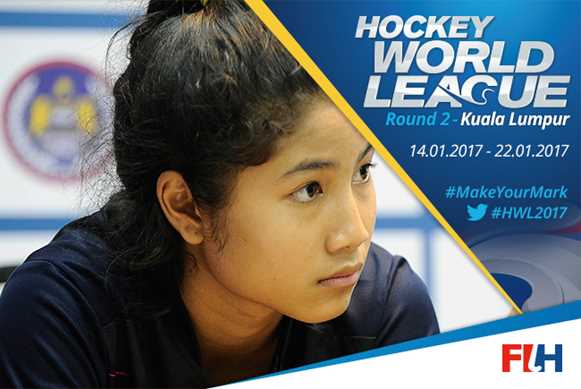 Thailand and Singapore will go head-to-head in the play-off for 5-6th placing on Sunday in the women Hockey World League Round 2 competition being played at Kuala Lumpur’s Tun Razak Stadium in Malaysia.

It was Singapore’s maiden victory in the tournament after finishing bottom of Pool A. They lost to Thailand (0-4), Wales (0-7) and Italy (0-9) in the preliminary round before suffering a 10-0 defeat at the hands of Ireland in the Quarter-Finals.

The Thailand versus Hong Kong match was hotly contested in the early stages before the Thais took the lead thanks to a penalty corner from Praphatson Khuilang, who netted her second goal of the tournament.

Thailand upped the ante after half time and increased the advantage to 3-0 with goals from team captain Tikhamporn Sakunpithak in the 37th minute via open play and Kornkanok Sanpoung five minutes from time.

“We went in with high hopes of winning this match”, said Tikamporn Sakunpithak after the match. “Our defeat against Malaysia in the Quarter-Finals inspired all the players to go out there and make amends. Now we aim to at least finish fifth in the tournament.”

Hong Kong captain, Lo I Ka, said the tournament has been a good learning exposure for the younger players in the squad who will form the backbone of the Hong Kong team in future.“There are a lot of positives here for the team. We don’t really look at the results as we have had a good share of our opportunities to score but squandered. It has been a good balance of attacking and defending in all matches.”