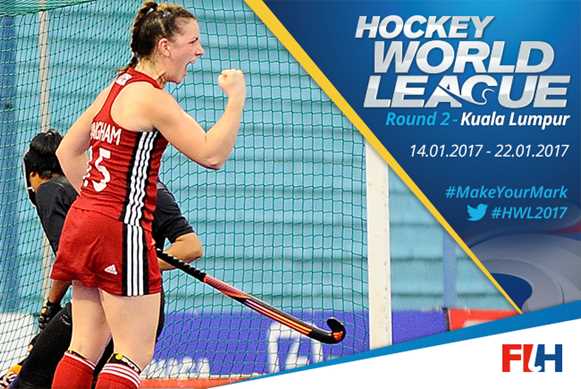 Quarter-Final line-up confirmed for Round 2 in Kuala Lumpur

Malaysia's Tigress thrashed Kazakhstan 13-1 and joined Italy and Ireland in high-scoring matches in final pool matches of the women's Hockey World League Round 2 at the Tun Razak Stadium in Kuala Lumpur today.

It was the Malaysians biggest victory and Kazakhstan’s highest ever margin of defeat in the tournament following the 12-0 loss against Ireland in the Pool B opening match last Saturday.

The Malaysians took the lead in the fifth minute as Nurul Nabihah Mansur showed great skills before slotting the ball past goalkeeper Guzal Bakhavaddin but Kazakhstan surprised fans with the equaliser three minutes later.

An aerial pass from a Kazakhstan player was poorly stopped by Malaysian captain Siti Noor Amarina Ruhaini and Vera Domashneva picked it well, raced into the circle and blasted the ball through the on-rushing goalkeeper Farah Ayuni Yahya. It was Kazakhstan’s first field goal in the tournament.

But that was as far as Kazakhstan could go when the Tigress picked up the pieces and roared back with 12 more goals. Fatin Shafika Mohd Sukri scored a hat-trick, Nuraslinda Said and Fazilla Sylvester netted a double whilst Noor Hasliza Md Ali, Nuraini Rashid, Norazlin Sumantri, Hanis Nadiah Onn and Norfaiezah Md Saiuti scored a piece.

Italy lived up to its FIH Hero World ranking of 15 by registering a 9-0 victory over Singapore in their Pool A match and Ireland defeated Hong Kong 10-0 in Pool B encounter earlier in the day.

The Italians lead Pool A on nine points followed by Wales (6), Thailand (3) while Singapore sit at the bottom with no points from three matches.

Agata Wybieralska converted a penalty corner in the 17th minute and team captain Chiara Tiddi increased the advantage in similar fashion three minutes later whilst Eugenia Mastronardi struck the third goal from open play in the 26th minute as the Italians took a comfortable 3-0 lead going into the interval.

The quick goals also punctuated any hopes of the Singaporeans had in making a comeback in the tournament following defeats against Thailand (0-4) and Wales (0-7).

Far from being contented with the score line, the Italians returned in the second half causing further damage. Valentina Braconi notched a hat-trick (40th, 44th and 59th minutes) and Agata picked her second goal of the day via a penalty corner while Dalila Mirabella and Maria Garraffo added to the Singaporeans misery with a goal each.

“It’s been a great finish for us in the pool matches. We arrived here with a positive target of finishing top of the standings and now that we have achieved that we look forward to the Quarter-Finals against Hong Kong,” said Italy’s captain Tiddi.

Wales and Thailand struggled for goals in the first half though it was the Welsh who dominated the game with six unconverted penalty corners.

The deadlock was broken when Natalie Blyth shot past Thailand goalkeeper Siraya Yimkrajang in the 28th minute from a penalty corner to give Wales the lead.

There was more fluidity in the Welsh game in the second half as they practically camped inside Thailand’s goal-scoring territory for long moments but could not find the space to put the ball into the net as the Thais were frantically busy holding their own fort with great tenacity.

Beth Bingham and Eloise Laity, however, dealt with it with a penalty corner and field goal in the 51st and 52nd minutes respectively to give Wales their second consecutive win here and a showdown against Kazakhstan in the Quarter-Finals.

“We are, without any doubt, happy with this second win after going through some tough moments picking the first goal against Thailand. Our aim is to finish high up in the pool and this has got the players all drilled up for the Quarter-Finals,” said Wales Head Coach Kevin Johnson.

Ireland’s Green Army also settled fittingly well against Hong Kong - to end their preliminary round with a bright finish by claiming a 10-0 victory after a sloppy start that saw them take a 1-0 lead through Roison Uptown’s penalty corner in the 18th minute.

Hong Kong could not find the answers to Ireland’s open and attacking game before falling apart in the second half as the Irish forwards followed up with double strikes from Kathryn Mullan and Anna O’Flanagan whilst Chloe Watkins, Rebecca Barry, Gillian Pinder, Nicola Evans and Nicola Daly duly added their names on the score list.