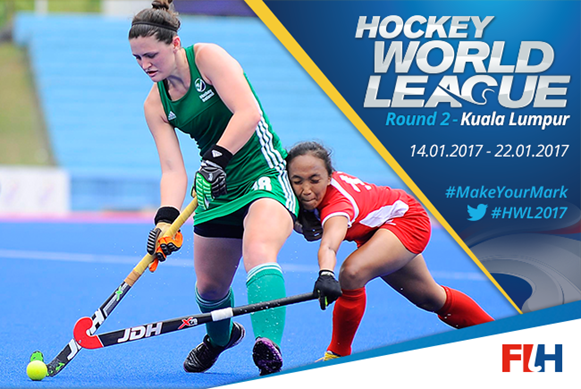 Malaysia, Italy, Ireland and Wales reach Semi-Finals at HWL Round 2 in Kuala Lumpur

The line-up for Saturday’s Semi-Finals at the women’s Hockey World League Round 2 event in Kuala Lumpur has been decided following another exciting day of action on Thursday (19 January).

The first of Saturday’s Semi-Finals will see Ireland playing Celtic rivals Wales, with home favourites Malaysia taking on Italy in the second Semi-Final.

Malaysia firmly booked their place in the Semi-Finals and also moved one step closer to qualifying for Hockey World League Round 3 following a 3-0 win over Thailand at Kuala Lumpur's Tun Razak Stadium. Malaysia Tigress Head Coach K. Dharmaraj watched his side struggle to break down their opponents before scoring three goals after half time to settle the contest.

“When we could not score from the many opportunities it got us under pressure as we needed to win this tie badly, even a single goal would do,” said Dharmaraj in the post-match press conference. “It is a knock-out stage and we have to move forward. The girls played a great game but we just could not get the early goals and that was the only problem.”

After a scoreless first half, Tigress team captain Siti Noor Amarina Ruhaini lifted Malaysian spirits with a 38th minute penalty corner effort before Norazlin Sumantri and Nuraini Rashid added to the score-line ahead of full time.

Competition favourites Italy were in fine form in their Quarter-Final, cruising to a 7-0 win over Hong Kong, with Valentina Braconi scoring a hat-trick. Braconi scored twice inside the first 12 minutes with Francesca Bendinelli and Chiara Tiddi making it 4-0 ahead of half time. Dalia Mirabella and Eugenia Mastronardi were both on target before Braconi completed her hat-trick and the scoring in the 56th minute.

Ireland confidently strolled into the Semi-Finals with an emphatic 10-0 win over Singapore. It was the Green Army’s second 10-0 scoreline in successive matches, having also achieved the feat in their Pool B contest against Hong Kong on Tuesday. Anna O’Flanagan and Roisin Upton both scored hat-tricks in the game, with Naomi Carroll, Rebecca Barry, Nicola Daly and Kathryn Mullan also on target.

Speaking after today’s victory, Ireland Head Coach Graham Shaw, said: “Today was all about getting the result. It’s very difficult to play hockey against a team with all 11 players inside the circle. We’re looking forward to the Semi-Final now.”

In the last Quarter-Final of the day, Wales survived a late charge from Kazakhstan to prevail 2-1 winners. Joanne Westwood fired Wales ahead in the 19th minute via a penalty corner but the Kazakhs, who lost 13-1 to Malaysia in a Pool B match on Tuesday, equalised through Syambat Sabazova’s 41st minute penalty corner effort. With a shoot-out looming on the horizon, Wales dug deep to earn a penalty corner with four minutes remaining, a chance that Leah Wilkinson took full advantage of to give her side a crucial victory.

Singapore, Hong Kong, Kazakhstan and Thailand will now play in the 5-8th classification matches on Friday. The Singaporeans go head to head against Kazakhstan with Hong Kong playing Thailand.