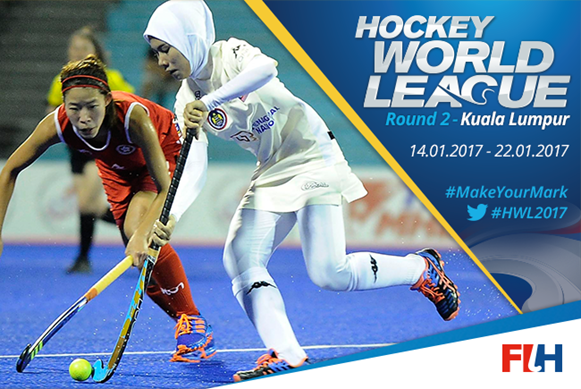 Malaysia's Tigress turned out a highly entertaining game en route to a 9-0 victory over Hong Kong in the women's Hockey World League Round 2 at the Tun Razak Stadium tonight.

The host was successful in six of the 13 penalty corners earned against Hong Kong in this Group B encounter played under a drizzle.

Malaysia Tigress coach, K. Dharmaraj, said: “It is good to win 9-0 despite missing out on so many chances in the first half. But I was confident we will win this match though we could have scored a few more. But you can score 20 goals and it will not make any difference in the new format as goal difference don’t count anymore. Now we need to go into our next match against Ireland (Monday) on the right footing. It will not be as easy as we won against Hong Kong as the Irish are a far tougher side and we have to contain them."

In a one-sided contest, it was a tough day in the office for Kazakhstan goalkeeper Guzal Baakhavaddin as the Irish Green Army pulverised them with ease. Remarkably, eight of the 12 goals came in the second half.

Ireland coach, Graham Shaw, said: “We did not set any target in the number of goals against Kazakhstan but they just came flowing from field goals though we missed quite a number in penalty corners.”

“It’s amazing how quickly the players have acclimatised to the conditions here and I am happy with the performance. But I do expect our match against Malaysia on Monday to be tough. The host are very comfortable on home ground and we need to go out there with a much better activation plan and performance,” he added.

Italy were sensational in the first half of their match against Wales despite both sides having to play under sweltering hot conditions that currently enveloped the city.

They took just 14 minutes to break the deadlock with Eugenia Mastronardi scoring from open play and Valentina Braconi further inspired her side with a brace (23rd and 36th minutes) to grab the vital points.

Italy’s captain, Chiara Tiddi, said: “It was a good game. We took our opportunities well against Wales and are very happy to start the tournament with a victory which is vital for us. We must carry on playing like this against Thailand in our next match tomorrow (Jan 15).

“The first half was pretty cautious for both sides and we were just waiting for the right opportunities to score. We were confident of making the breakthrough eventually,” added the 29-year-old Chiara who earned her 120th international cap today.

Prior to the start of the match, Italy Hockey Federation Vice-President Enrico Medda presented a bouquet of flowers to midfielder Jasbeer Kaur Singh for her 50th international appearance.

Wales coach, Kevin Johnson, however, credited the Italians who played a far better game in this opening tie between the two European nations. “The difference lies in creating opportunities and turning those chances into goal. We could not do that and the Italians took theirs very well,” said Johnson, adding that his side will certainly rise from this setback to gain full points against Singapore tomorrow (Jan 15) and Thailand (Jan 16).

Thailand, who claimed gold medal in the 4th Women's AHF Cup last October with a clinical 4-0 finish against Singapore in the final, produced the same kind of performance against the nation they defeated for the title who were this time led by a mix squad of seniors and Under-18 players.

Kornkanok Sanpoung inspired the Thais early in the game with a seventh minute field goal strike but Korean coach Bae Young Wook’s side were restricted to a 1-0 lead until the 52nd minute.

A three-goal blitz within a space of six minutes from Praphatson Khuiklang (52nd), Sirikwan Wongkeaw (57th) and Kornkanok’s second in the match (58th minute) gave the Thais a resounding start to their campaign.