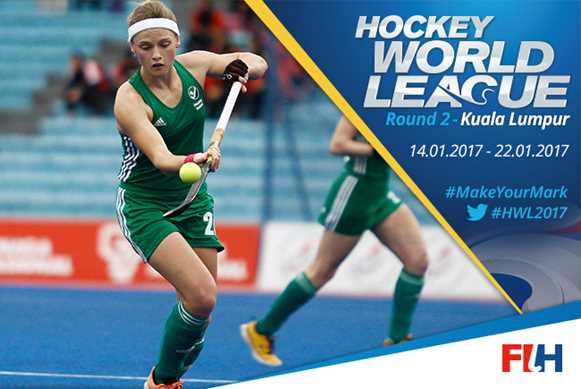 Malaysia scored a sensational 2-1 win over higher-ranked Italy in a sudden-death shoot-out to join Ireland, winners against Wales, in qualifying for the World League Semi-Finals at the women’s HWL Round 2 event in Kuala Lumpur.

On Semi-Finals day in front of nearly 2000 fans at the Tun Razak Stadium, K. Dharmaraj’s Malaysia (Hero FIH World Ranking: 21) twice fought back from a goal down to hold the 15th ranked Italians to a 2-2 draw in regulation time while Ireland downed Wales 2-0 in the first of the final four contests.

The results mean that both Malaysia and Ireland have qualified for this summer’s Hockey World League Semi-Finals competitions in Belgium and South Africa, where tickets to the women's Hockey World Cup 2018 in London are on the table.

“For the last year these players have been training very hard," said Dharmaraj in the post-match press conference. "Our training programme starts at 5am and they train twice a day. Today is the result of the hard work and they deserve to be in the World League Semi-Finals.”

He continued: “When we went into the shoot-out I was still confident we will make it. My heart was pounding faster than usual and when Fatin (Shafika) stepped up in the sudden-death after the Italian player missed, I said to myself ‘we are through’.”

The Malaysian women have never qualified for the World Cup and the women's Hockey World League Round 2 event is Dharmaraj’s first major assignment as Head Coach since taking over the position in January 2016.

Ireland’s Green Army and Malaysia’s Tigress will meet in the final of the Women Hockey World League Round 2 tomorrow (22 January) while Italy and Wales will battle for third placing.

All of the goals in the Italy versus Malaysia contest came ahead of half time. Midfielder Maria Garraffo fired the Italians ahead in the 10th minute from open play but this was quickly cancelled by Fazilla Sylvester Silin three minutes later from a penalty corner.

The Italians, undaunted by the equaliser, continued with a barrage of counter attacks at the start of the second quarter and were rewarded with a penalty corner in the 18th minute. Agata Wybieralska made no mistake to give the Italians a 2-1 advantage, but once again Malaysia’s Tigress produced a great fight-back with a Hanis Nadiah Onn field goal four minutes before the end of the first half to draw level.

The second half saw the Malaysians and Italians having a fair share of ball possession and goal opportunities but with no change to the scoreboard - pushing the game into a shoot-out.

Goalkeeper Farah Ayuni Yahya was the toast of the Tigress as she kept the Italians at bay in the first round of shoot-outs which saw finished with the teams locked at 1-1 after five attempts each. Italy’s Dalila Mirabella and Fatin Sukri were the only successful Italian and Malaysian players.

However, Valentina Braconi missed the first shoot-out in sudden-death before Fatin Shafika Md Shukri stepped up to gave all Malaysians a night to celebrate.

Two goals in two minutes gave Ireland a 2-0 victory over Wales to advance into Sunday’s final. Ireland’s Yvonne O’Byrne broke the deadlock in the 27th minute with a penalty corner goal before Anna O’Flanagan doubled the lead from open play a minute later. O’Flanagan has been in sparking form in Kuala Lumpur, having found the net 11 times to sit comfortably at the top of the scorer’s charts.

The second half saw both sides creating chances but Ireland held the advantage with possession. Irish goalkeeper Ayeisha McFerran made a strong save in the final few minutes of the third quarter to keep the marauding Wales forwards at bay and keep a third successive clean sheet in Kuala Lumpur.