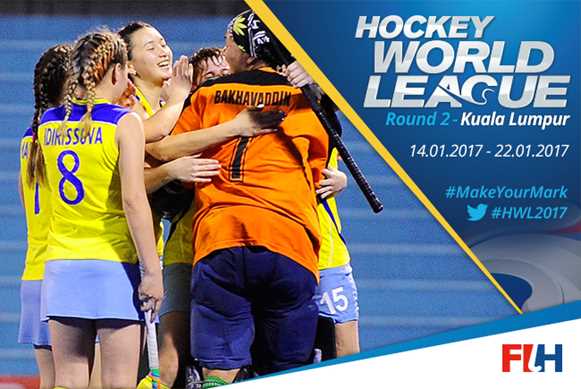 The Hero FIH World Rankings were thrown out of the window on Monday (16th January) as Ireland’s Green Army wrestled with Malaysia’s Tigress en-route to a 2-1 victory in the women’s Hockey World League Round 2 competition taking place in Kuala Lumpur’s Tun Razak Stadium.

In what was arguably the best match so far played at the competition, it came as no surprise when the Tigress ended on the losing side but the quality of their efforts earned them a standing ovation from fans and Malaysia Hockey Confederation officials.

The Malaysians surprised the gallery with their determination, speed and individual skills in this crucial match against their European opponents. Ranked world number 16, the Irish were up against the host, ranked 21 in the world, and were prepared for a tough time in this crucial encounter in unfamiliar territory.

Despite defeat, Malaysia remain second in Pool B and sit one point ahead of Kazakhstan, ranked 33rd, whom they play in the last pool match on Tuesday. Three points from the Kazakhstan game would likely result in a quarter-final meeting against the third placed side from Pool A, a position currently being contested by Wales and Thailand.

"I am very proud of my players who took the game to the higher ranked Irish and even won six penalty corners”, said Malaysia coach K Dharmaraj.  “But we could not score and that was the only difference today between both the teams. Looking forward, we need to beat Kazakhstan by a simple margin and we are half way there.”

In a sudden burst of counter-attack in the sixth minute, an unmarked Irish captain Chloe Watkins picked the ball at the top of the circle and swept it past an outstretched goalkeeper Farah Ayuni Yahya, who fell short in reaching the ball much to the joy in the Ireland camp.

But that early goal only fired-up the wounded Tigress as they came back firing on all cylinders with four unconverted first half penalty corners.

The drama continued after half time as the Malaysians chased for the equaliser. Hanis Nadiah Onn saw her powerful shot padded away by goalkeeper Ayeisha McFerran in the 42nd minute and team captain Siti Noor Amarina’s penalty drive in the 49th minute was well saved by McFerran once again.

Ireland, however, silenced the home fans with a 51st minute field goal from Anna O’Flanagan to go 2-0 up but the Malaysians rallied back for the equaliser through Hanis Nadiah who placed the ball into the back of the net in the 54th minute from an acute angle on the left.

The next six minutes proved to be nightmarish moments for the Irish as the Tigress went at full force to earn four penalty corners but Graham Shaw’s Green Army prevailed until the end.

Ireland’s Head Coach paid glowing tribute to the Malaysians whom he reckoned have the pedigree to play excellent hockey at the world level.

“I'm surprised that Malaysia is ranked 21 in the world as they played very well. They are a good set of players with great individual skills and should give every team they meet after this a tough fight. They should make it to the semi-finals.”

Kazakhstan won their first two points in the tournament following a 2-0 victory over Hong Kong in a shoot-out after the match ended 1-1 in regulation time.

Vera Domashneva fired Kazakhstan ahead in the sixth minute from a field goal but Hong Kong rallied back three minutes later for the equaliser through Ching Nam Chan. However, in the shootout only Symbat Sabazova and Alissa Chepkassova were successful.

“Honestly, the players have only been training indoor for the last few weeks as it is winter season back home. The only pitch that we have is covered in snow. That is why we could not settle down against Ireland in our first match but today we played a much better game,” said Kazakhstan Head Coach Serik Kalimbayev.

As for the last group match against the Malaysia’s Tigress, Kalimbayev said: “We are determined to go all out against the host. They are a great team and we will watch them play Ireland tonight and come up with a plan. The players are all fired up after this win and hopefully ‘shock’ the Malaysians on Tuesday,” added Kalimbayev.