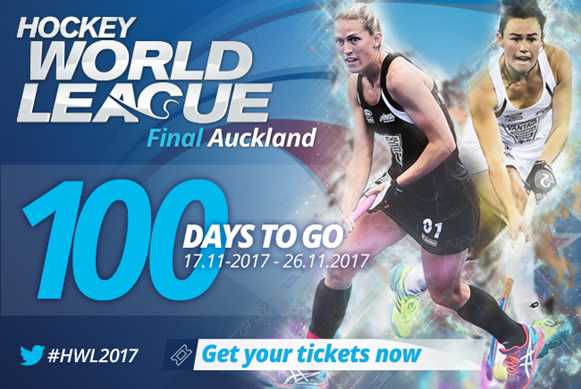 With just 100 days to go until the Women’s Hockey World League Final in Auckland, New Zealand, don’t miss out on the best seats in the house by booking your tickets early!

Re-matches, revenge and redemption – its sport at its finest as the third edition of the Women’s Hockey World League draws towards its exciting conclusion in New Zealand's home of hockey at North Harbour Stadium. Fans will be able to buy tickets via the official ticket website and, with the best teams in the world coming together for a year end showdown, this is a must-see event.

This truly is the best of the best, with only Australia missing from the top-ranked teams in the world. For the match schedule, click here. While every game will be a humdinger, watch out in the pool rounds for the second match of Day One when the Netherlands take on the host nation in a rematch of the Hockey World League Semi-Finals – a match that New Zealand felt they should have won.

Pool B will be tightly contested – for title holders Argentina, the past few months have been a period of building after the departure of influential captain Carla Rebecchi in 2016. Head coach Agustin Coradini will be looking for his team to fulfil their potential and turn around results from the Hockey World League Semi-Final in Johannesburg, where they lost to both Germany and England. These three teams are joined by China, who were runners-up to the Netherlands in the Brussels Hockey World League Semi-Finals.

China, Korea, England and Germany have all competed in the previous two editions, with England picking up bronze in Tucuman 2013 and Germany winning bronze in the most recent edition, held in Rosario. Korea has the unenviable record of finishing in eighth spot on both previous occasions, while China has a sixth place and fourth place to its credit.

For Germany, there has been a steady collection of medals in the past few years, but there is no doubt that the silver they won in Johannesburg has whet the team’s appetite to add another gold to their 2013 EuroHockey gold.

The Netherlands won the first edition but came a disappointing fifth in Rosario 2015. Head coach Alyson Annan was pleased with her team’s performance in the recent Hockey World League Semi-Finals, where they sailed to the winners’ podium unbeaten, but knows they must step up a gear in Auckland to secure a second win. Should the Oranje meet England in this event, then the Dutch will be looking for redemption after two shoot-out losses cost them EuroHockey gold in 2015 and Olympic gold in 2016.

Host nation New Zealand came second to Argentina in Rosario 2015 and know from that experience the power of having a vociferous home crowd behind them. As sole representatives of Oceania, after Australia crashed out of the qualification spots in Brussels, New Zealand will want to give the supporters at the North Harbour Stadium something to cheer about.

The Hockey World League is the culmination of two years of global hockey competition, which started with Round One back in Singapore, Suva, Prague, Accra, Douai, Salamanca and Chiclayo. The teams who progressed from those events, contested Round Two in Kuala Lumpur, Valencia and West Vancouver before the Semi-Finals, which also served as World Cup qualifying events.

The event will have its own event page on FIH.ch but you will also be able to keep up to date with all the latest information in the lead-up to this showcase finale by following the FIH on Twitter, Facebook and Instagram. Use the hashtag #HWL2017

Plan your visit to the Hockey World League Finals by visiting the official ticketing website here.

Note: tickets do not go on sale until the week beginning 14 August. On 15 August PRE-SALE tickets go on sale. These are available to anyone with a codeword (distributed nationwide to the hockey community).

Tickets to the general public go on sale at 10am Tuesday 22 August.
Tickets for the Final day will not be on-sale at this stage.
Back