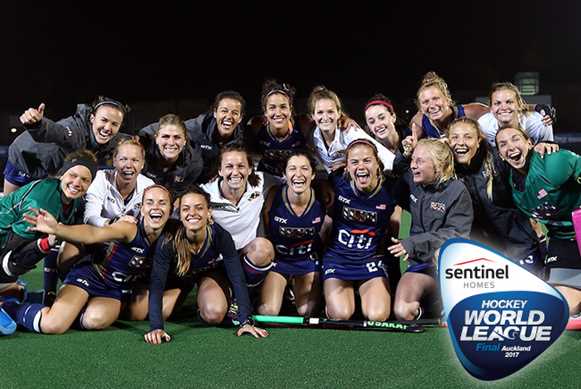 USA will be looking for back to back FIH event triumphs Photo: FIH/Getty

It’s an end of the year showdown you won’t want to miss! USA Women’s National Team Head Coach Janneke Schopman and coaching staff have confirmed the 18-athlete roster that will travel to Auckland, New Zealand for the women’s FIH Sentinel Homes Hockey World League Final, November 17-26, 2017. The selected squad is a mix of veterans and young talent, some of whom are getting their first opportunity to perform abroad on the international stage.

“We had to make some changes to the roster since last summer because of injuries and college season, but I’m excited to bring new players to this level of competition,” said Schopman. “With this team, we will bring the fight and it gives us a great opportunity to see where we stand amongst the top nations in the world.”

This is counter-balanced with a few rookies who get the chance to wear the red, white and blue for the first-time off home soil. Casey Di Nardo (Virginia Beach, Va.) will be earning her first international cap for Team USA as Erin McCrudden (Yorktown Heights, N.Y.) and Carissa Vittese (Cherry Hill, N.J.) will look to build on an already started solid career platform.

McCrudden competed in the USWNT vs. Ireland series in May and C. Vittese saw action in the 2017 women’s Pan American Cup (PAC).

A few athletes, who hope to still be competing in their collegiate seasons, were left off the roster due to an overlap in NCAA post-season and Final competition schedule. Some injuries have also sidelined a few other players.

In its third edition, the Final will take place at the North Harbour Hockey Stadium and feature eight teams that are currently ranked in the top-nine of the FIH Hero World Rankings.

“With this team, we will bring the fight and it gives us a great opportunity to see where we stand amongst the top nations in the world.”
USA Head Coach, Janneke Schopman

Team USA is ranked No. 4 in the FIH Hero World Rankings and as first time Final debutants they sit in Pool A with No. 1 The Netherlands, along with host No. 6 New Zealand and No. 9 Korea. Equally as competitive Pool B consists of Rio 2016 Olympic Games Gold Medalists No. 2 England, recent Pan American Cup Champions and defending Final Champions No. 3 Argentina, No. 7 Germany and No. 8 China.

USA will open up tournament play in the first match of the event against Korea on Friday, November 17 at 02:00 Eastern Time (18:00 local time).

Just before the Final, USA will travel to Australia to participate in the International Festival of Hockey (IFOH). This world-class tournament will see the nations of Australia, Japan, New Zealand, The Netherlands and the USA battle it out across a week-long competition. Now in its second year, the IFOH will be a valuable experience before Team USA heads to New Zealand for the Final.

“The International Festival of Hockey gives us the opportunity to play high level games prior to the World League Final,” added Schopman. “Playing against countries like Australia, Japan and The Netherlands will gives us the chance to try some things out and be fully ready for the start of World League especially coming of of a couple of months of training without actual games.”

Click here for the full International Festival of Hockey schedule.

For the first time in history, all USA games and the women’s medal matches of IFOH will be broadcast live on the Olympic Channel. This per cable subscription service is at no additional charge. Find out more about the Olympic Channel here.